This drink helps you burn fat… while you sleep! 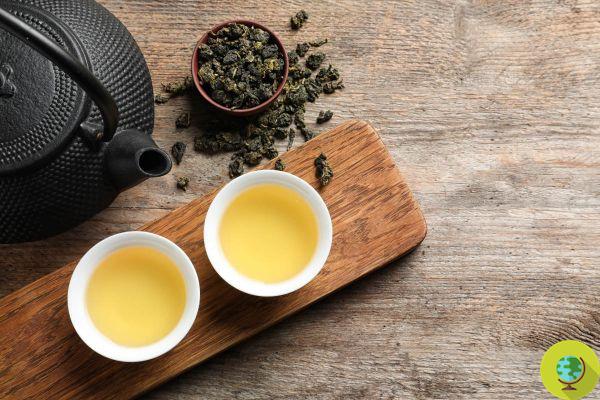 Oolong tea has the ability to burn fat even while you sleep and without affecting your sleep. A Japanese study found that out

A Japanese research team has found that drinking two cups a day of a particular tea can help burn fat while you sleep. This is oolong tea, popular and widespread especially in China and Taiwan.


Scientists at Tsukuba University in Japan sampled a group of non-obese male volunteers who, during each 14-day session, consumed oolong tea (100 mg of caffeine, 21,4 mg of gallic acid, 97 mg of catechins and 125 mg of polymerized polyphenols), caffeine (100 mg) or placebo for breakfast and lunch.

On day 14 of each session, indirect 24-hour calorimetry and polysomnographic sleep recording were performed. It was thus seen that oolong tea and caffeine increased fat breakdown by about 20% in healthy volunteers compared to placebo but oolong tea, unlike caffeine, stimulated fat oxidation without interfering with sleep.

The results of the study, published in the journal Nutrients, basically show that both oolong tea and pure caffeine contribute to fat burning but, and this was the surprise,  oolong tea continued to have this effect even while the participants slept.

"The stimulating effects of oolong tea on fat breakdown during sleep may have real clinical relevance for weight control," commented Professor Kumpei Tokuyama, lead author of the study.

Although all teas come from the same plant (Camellia sinensis), the degree of oxidation defines the specific type. For example, green tea is not oxidized and has a mild flavor, while the characteristic color of black tea comes from complete oxidation. Oolong tea, being partially oxidized, exhibits the characteristics of both green and black tea.

Like all teas, oolong also contains caffeine, which affects energy metabolism by increasing our heart rate. At the same time, although it contains caffeine, this tea does not affect the ability to fall asleep quickly and sleep in general.

Scientists are now trying to determine if the effects they observed translate into real body fat loss over an extended period.

“Additionally, we want to test decaffeinated oolong tea to better distinguish the effects of caffeine from other tea components, which will help us understand exactly how oolong helps break down fat,” concluded Professor Tokuyama.

add a comment of This drink helps you burn fat… while you sleep!