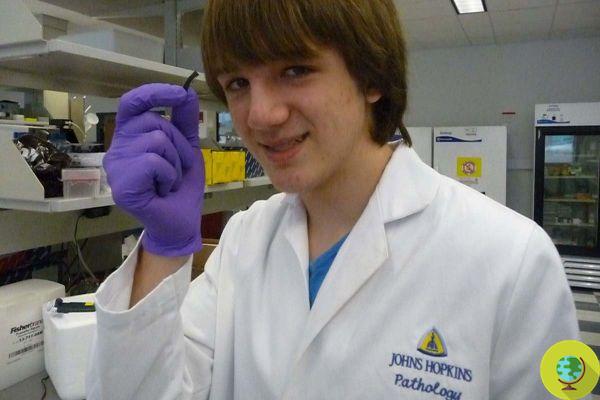 Jack Andraka at the age of 15 had already made himself known by designing a test for the early detection of pancreatic cancer which, according to what has been obtained from his laboratory experiments, has an accuracy rate close to 100%. A brilliant idea that has also been criticized for some.

Jack Andraka at the age of 15 he had already made himself known by designing a test for early detection of pancreatic cancer which, according to his laboratory experiments, has an accuracy rate close to 100%. A brilliant idea that has also been criticized for some.

This brilliant young man from Crownsville, Maryland (USA) has devised a tool that could potentially save thousands of lives. This is not a cure but a device capable of early detection of pancreatic cancer (one of the most dangerous as it is often diagnosed when it is in an advanced stage).

Discovering very early that you are suffering from this tumor could really make the difference between life and death, allowing patients to undergo the necessary treatments promptly and thus being able to have higher chances of survival.

The impetus for his idea was born following the untimely death of a friend, due to a pancreatic cancer discovered late. At that point the young inventor realized that a large part of the problem lies precisely in the lack of early diagnosis methods and therefore set to work to find one.

By doing some research, Andraka realized that the methods of detecting this cancer are now obsolete as well as expensive and have no certain reliability. Compared to these, the method invented by the boy was 168 times faster, 26 thousand times less expensive but above all accurate (but at the moment only in laboratory tests) practically 100%!

Andraka's first mission was to isolate a molecule like pancreatic cancer biomarker which can be detected during the initial phase of the disease. This is the mesotelina.

He then had the idea of ​​finding antibodies sensitive to this protein binding them with a network of nanotubes, which could detect high levels of mesothelin present in blood samples from patients with early-stage pancreatic cancer. Finally, he inserted them into a paper matrix.

It was a good theory and a good starting point but Andraka wouldn't be able to test her idea at home, she needed adequate laboratory space. To obtain it, he sent his thesis to 200 researchers and among them the laboratory director of the John Hopkins School of Medicine gave him the green light to use its spaces.

What in the end the very young Andraka managed to invent is a very small device, a dipstick probe with filter paper which, when used with an instrument for measuring electrical resistance, can detect cancer early. Andraka also believes that the same device could potentially detect any disease by changing parameters.

In reality everything turned out to be less easy than expected by the boy and, despite the awards received and the appreciation, several scientists have criticized this method.

First of all there are no tests and concrete studies on what the boy discovered but above all use mesothelin as the only tumor marker it could be misleading as it happens that the value of this protein is the same in healthy and sick patients.

However, it is a very promising project, especially if we think that it was conceived by a teenager. But it seems that there is still a lot to do to make a test of real use.

This workout is 3 times more effective than just walking, according to new research ❯