There is too much salt in "healthy" snacks, more than chips, peanuts and even sea water

A new study has found that some snacks considered "healthy" actually contain a lot of salt, more than chips and in some cases even more than sea water.


To avoid chips, peanuts and other unhealthy snacks, people who want to keep fit and eat a healthy diet are often oriented towards some snacks that are considered better alternatives. These include dried legumes, chickpea chips, toasted corn and more.

However, an investigation by the Action on Salt (AOS) group, based at Queen Mary University of London, revealed that many of these snacks are actually not healthy at all.

Our NEW #SaltAwarenessWeek survey reveals some ‘healthy’ snacks aren’t as healthy as we may think… check it out here (THREAD) https://t.co/0HKAbrdoQ7 pic.twitter.com/JG1nTZZjtP

The analysis concerned 119 products perceived as "healthy" compared to other types of snacks. Of these 43% were too rich in salt.

Dried / roasted pulses and corn-based snacks were (on average) the saltiest at 1,85g / 100g and were more salty than peanuts and chips. Experts give a concrete example: a 45g serving of Love Corn Salt & Vinegar and Love Corn Habanero Chilli (flavored roasted corn), contains more salt than 3,5 bags of Walkers Ready Salted crisps.

"While these products are (on average) lower in fat, saturated fat and calories and higher in fiber than standard potato chips and flavored nuts, over one in three (43%) are also high in salt (i.e. more of 1,5 g / 100 g) a forgotten ingredient that increases our blood pressure and puts us at greater risk of strokes and heart attacks ”the AOS experts write.

In some cases the snacks analyzed were found to be contained a higher salt concentration than that of Atlantic seawater (which contains 1,0g of sodium per 100g, which is equivalent to 2,5g of salt per 100g). 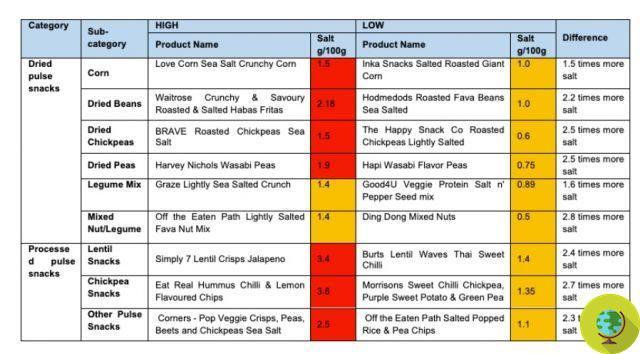 Although many products are high in salt, the data also shows a wide variation in the content of this ingredient in different snacks, which shows that they can be prepared using less.

AOS then reports a problem of etiquette.

"Most products have nutrition claims on their packaging which, while legal, mislead consumers by creating a distorted 'health halo' and discouraging shoppers from checking ingredients more thoroughly"

For example, the saltiest snack in the sample, Eat Real Hummus Chilli & Lemon Flavored Chips contains 3,6g of salt / 100g, but on the front of the package it says “40% less fat, vegan, gluten free“. All true, of course, but this gives an incomplete picture of the product. If the buyer did not trust the slogans and went to read the nutritional table, he would discover the excessive salt content.

Over 80% of the snacks sampled had labels such as "Less fat", "No added sugar", "Source / High fiber / protein") and almost all (93%) including statements such as "Gluten free "," Vegan "," All natural "and "Without artificial preservatives ".

One in three snacks then specified the use of sea salt, considered a better variant, but which actually has the same sodium levels and nutritional value as table salt.

Given the results of the survey, released on the occasion of Salt Awareness Week which took place from 8 to 14 March, the Action on Salt researchers are calling for a restriction on the use of misleading nutrition claims on foods unhealthy.

Indoors, airborne transmission of the coronavirus must be taken seriously, 239 scientists write to WHO ❯

add a comment of There is too much salt in "healthy" snacks, more than chips, peanuts and even sea water