The vegan diet is better for losing weight and lowering cholesterol than the Mediterranean diet. I study 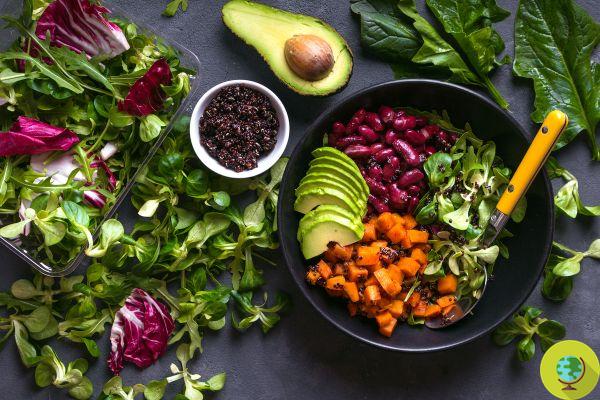 The vegan diet is more effective for weight loss than the Mediterranean diet. A new study came to this conclusion that compared the two diets to see what effect they had on weight, cholesterol levels and other important variables for our health.


The study, led by a team from the Physicians Committee for Responsible Medicine (PCRM), randomly assigned the 62 participants, who were overweight and had no history of diabetes, a vegan diet, or a Mediterranean diet.

For 16 weeks, half of the participants followed a low-fat vegan diet which eliminated animal products and focused on fruits, vegetables, whole grains and legumes. The other half followed a Mediterranean diet, according to the PREDIMED protocol, which focused on fruit, vegetables, legumes, fish, low-fat dairy products and extra virgin olive oil, limiting or avoiding red meat and saturated fats.

Neither group had a calorie limit and the participants did not change their habits regarding physical activity or taking medications.

After 16 weeks, the participants returned to their basic diets for a period of four weeks before moving on to the opposite group for another 16 weeks.

Specifically, the study found that participants:

Previous studies have suggested that both the Mediterranean and vegan diets improve body weight and cardiometabolic risk factors, but until now, their relative efficacy had not been compared in a randomized study. We decided to test head-to-head diets and found that a vegan diet is more effective for both improving health indicators and increasing weight lossSaid Hana Kahleova, lead author of the study and director of clinical research of the Physicians Committee.

The Mediterranean, on the other hand, probably had no effect on weight loss as it included fatty fish, dairy products and oils.

“If your goal is to lose weight or stay healthy in 2021, choosing a plant-based diet is a great way to achieve it,” concludes Dr. Kahleova.

The study was published in the Journal of the American College of Nutrition.

Fonti: EurekAlert / Journal of the American College of Nutrition

Is the vegan diet dangerous for the brain? Not if you (also) take choline ❯

add a comment of The vegan diet is better for losing weight and lowering cholesterol than the Mediterranean diet. I study