“The Unhappy Truth About Soda”: the cartoon video against carbonated drinks 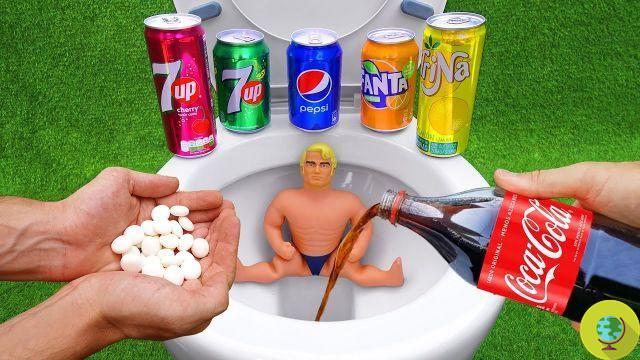 A fizzy drink as a synonym for happiness. This is the combination that for years has led most of the commercials that promote the consumption of carbonated drinks, represented as indispensable to make your days or moments of celebration more fun. Thinking about the damage to our health caused by the consumption of fizzy drinks, there is however no reason to be happy.

A carbonated drink as a synonym for happiness. This is the combination that has guided most of the commercials that promote the consumption of carbonated drinks, represented as indispensable to make their days or moments of celebration more fun. Thinking about the damage to our health caused by the consumption of fizzy drinks, however, there is no reason to be happy.

Against the advertising campaigns that promote the consumption of Coca Cola and other similar drinks as normal and healthy, the American Center For Science in the Public Interest has decided to take a stand, which has decided to make a video, entitled “The Unhappy Truth About Soda”, to explain in the most immediate possible way the damage caused by the consumption of carbonated soft drinks.

The protagonist of the film is one polar bear family. These animals were not chosen by chance, as the most attentive will have guessed, precisely because they are frequently the protagonists of commercials for the promotion of the most famous carbonated drinks. The bears protagonists of the video, convinced that drinking fizzy drinks represents a normal and risk-free habit, unfortunately find themselves facing unpleasant consequences.

The cartoon shows how the onset not only of dental problems or problems can be linked to the consumption of fizzy drinks obesity, but also of diseases such as diabetes, which hits Papa Bear and will force him to amputate a paw and impotence. The cartoon video wants to highlight these serious consequences, in order to sensitize all consumers, starting with parents, to dissuade their children from consuming carbonated soft drinks.

Those who took care of the realization of the video, did not limit themselves to giving life to an instructive cartoon, but accompanied it to a long list of the damage that can be caused to our body by consuming some of the best known fizzy drinks on the market.

For a child, consuming one fizzy drink a day can result in a 60% increase in the risk of obesity and a 27% increase over the risk of getting sick 2 type diabetes, as well as incurring dental caries. Each fizzy drink consumed per day can increase the risk of suffering by 19%cardiac atologies for men who, in case of type 2 diabetes, could be accompanied by unpleasant problems such as erectile dysfunction.

The introduction of calories through liquid foods, such as carbonated or sugary drinks, pushes the body to gain weight more easily, as it would not be able to react by compensating the introduction of the same with a stimulus to decrease the calories to be taken through the meals consumed during the day.

Experts also point out that most of the carbonated soft drinks commonly sold can contain phosphoric acid, highly deleterious for the teeth, and additives associated with the presence of 4-methylimidazole, a believed contaminant carcinogenic. THE children for years now they have been at the center of advertising campaigns to promote the consumption of carbonated soft drinks, which push their manufacturing companies to invest astronomical amounts every year for the realization of the relative advertising spots.

The little ones, therefore, are the first to suffer the negative health effects of fizzy drinks. THE Parents they should take much more drastic action in this regard. Time to change course! We therefore contribute to spread the video animated information, also through Social Networks, so that a greater awareness of the subject can arise in an ever-increasing number of people.

Do you always bite your nails? According to this study, you are a perfectionist (but not in a good way) ❯

add a comment of “The Unhappy Truth About Soda”: the cartoon video against carbonated drinks