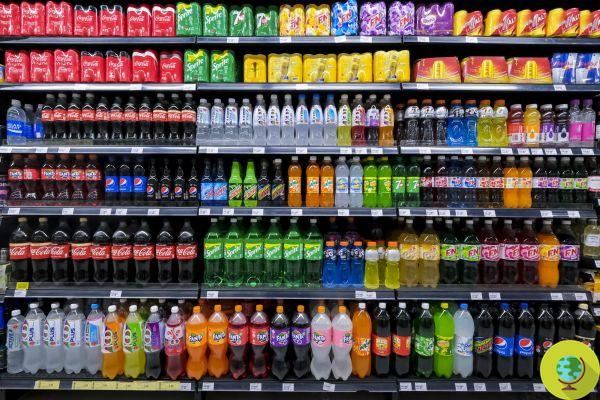 Those who consume two or more sugar-containing drinks a day are more likely to get bowel cancer. This is revealed by a new study conducted by US Nurses' Health II

Sugary drinks are even more deleterious than imagined so far: those who consume two or more drinks containing sugars a day risk getting sick more easily than bowel cancer. And they are among the most exposed subjects women under 50. This was revealed by the most important scientific study on the correlation between tumors and sugary drinks conducted in the United States. The medical team at Washington University in St. Louis questioned the causes of the increase in colorectal cancer cases in several high-income countries over the past two decades, thus discovering the crucial role played by recruitment. of sugary drinks.


These drinks were already known to be particularly harmful as they can cause obesity and type 2 diabetes, but up until now there was little evidence on the link between bowel cancer and the abuse of these sugar products.

The subjects most exposed to the onset of bowel cancer

To investigate the matter, the researchers looked at medical records and diets from beyond 95.464 women from 1991 to 2015. Their research revealed an alarming fact that women who consumed one or more sugary drinks per day were twice as likely to develop bowel cancer as those who drank less than half. Specifically, according to what was found by the monitoring, 109 women developed bowel cancer before the age of 50.

To test whether the consumption of sugary drinks during adolescence plays an important role in increasing bowel cancer rates, experts gave 41.000 women a series of questionnaires about their eating habits during their adolescence and discovered another fact. very useful: for each sweetened drink (about 350 ml) taken daily the chance of getting bowel cancer by age 32 increases by 50%.

"Our findings reinforce the public health importance of limiting sugary drinks to improve your health," explain researchers from Washington University in St Louis.

But, of course, the intake of sugary drinks is not the only cause that this disease can be associated with, and rather than talking about the cause, doctors prefer to call it a correlation. In fact, scholars have shown that the risk also increases by consuming red meat, low fiber and in subjects smokers and who consume alcohol regularly.

Bowel cancer is one of the most common cancers in countries like the United States and the United Kingdom. In the last 20 years there has been an increase in these cases among younger subjects and this situation worries experts, who recommend limiting sugary drinks and improving your lifestyle by following a healthy diet and practicing physical activity.

The incredible amount of refined sugar we eat ❯