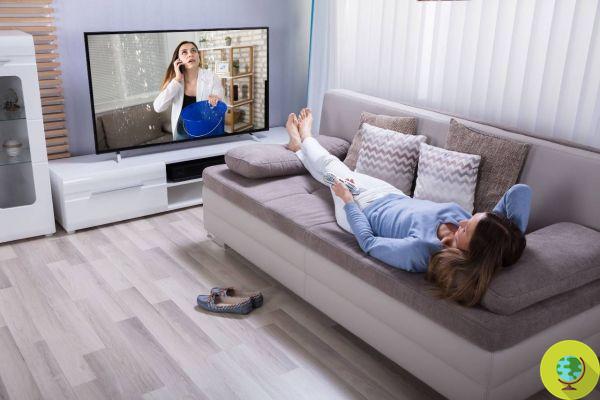 Watching too much TV between the ages of 40 and 60 exposes you to more cognitive problems in old age. These are the results of 3 new studies

Watching too much TV between the ages of 40 and 60 exposes you to more cognitive problems in old age. These are the results of 3 new studies


Watching too much television is bad for all ages, but now some new studies point to the side effects on brain health in people in their 40s and 50s.

The more television you watch between the ages of 40 and 50, the greater the risk of brain health problems in subsequent years. Excessive use of TV in middle age can, over time, worsen brain function, cause cognitive decline and even reduce gray matter.

This is stated by some researchers who have recently presented three new studies at the Epidemiology, Prevention, Lifestyle and Cardiometabolic Health Conference 2021 of the American Heart Association.

Studies have used the habit of watching a lot of TV as a measure of sedentary behavior. The participants' brain health was then measured by having them answer a few questions about their habits, administering cognitive tests, and finally having their brains MRI scanned.

The amount of television was measured considering the amount of content viewed during free time (never or rarely, moderate, high).

The findings suggest that people who self report watching moderate or excessive amounts of TV experience greater cognitive decline and a reduction in gray matter in the brain as they age.

Experts calculated that every 1-hour increase in a person's average daily TV viewing time was linked to a 0,5 percent reduction in gray matter volume. Gray matter is involved in decision making, hearing and vision but also muscle control.

The researchers also found that the positive impact of physical activity wasn't enough to combat or counter the negative impact of watching TV. This obviously does not mean that we should give up physical exercise but quite the opposite, moving or doing something else is definitely a healthier choice than sitting down to watch TV.

This work adds to similar research that suggests an association between television watching and cognitive decline in old age but does not demonstrate causation. Further research is therefore needed to understand this connection, for example by verifying whether the problem is the TV itself or just being sedentary for too long.

In the meantime, however, experts recommend choosing another activity of your own liking that can worthily replace the TV and undoubtedly there are many: reading a book, taking a walk in nature, indulging in a creative hobby, just to name a few. .

The effects of particulate matter (PM2.5) and fine dust in your body ❯