The severely allergic child saved by washing the blood 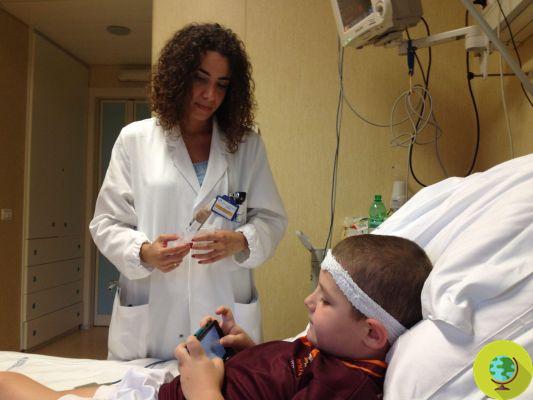 Michele is finally back to school and to play with his peers. Suffering from severe forms of allergy, the child was saved by the doctors of the Bambin Gesù in Rome after being subjected, in August, to a "selective washing of blood

Michele he is finally back to school and to play with his peers. Suffering from severe allergies, the child was saved by the doctors of the Bambin Gesù in Rome after being subjected to a washing selective of blood.

Michele, just 7 years old, was suffering from a very serious one allergy associated with asthma. Foods such as milk, eggs, nuts, fish and fruit were a real poison for him.

The severity of his allergy was so high that it prevented him from taking the medicine that he could keep the disease at bay because the side effects would be dangerous.

Hence the need to opt for a different solution with the so-called blood washing.

"The little patient was subjected to an innovative treatment that gave him back a normal life, healing him from the severe form of allergy. This is the first case in the world of 'selective washing' blood test performed on a hyperallergic pediatric patient. Technically called ‘immunoadsorbimento IgE', the procedure is carried out with a machine capable of eliminating from the blood only the antibodies that trigger allergies”Explains a note from the Bambino Gesù Pediatric Hospital.

IgE are the antibodies responsible for allergies. By eliminating them from the blood in a selective way compared to traditional techniques, the new system is also suitable for children given the reduced volume of blood that ends up in extracorporeal circulation (80 ml).

Today Michele has finally resumed a normal life. The doctors explain that since the end of the treatment the child has seen an increase in the tolerance threshold to foods that previously risked causing him anaphylactic shock. Asthma is also kept at bay and the little one is no longer life threatening.

FOOD ALLERGIES: 4 MILLION USELESS TESTS. HERE ARE THE MOST ABSURD

NICKEL ALLERGY: THE 10 MOST COMMON SYMPTOMS

ALLERGIES: CLIMATE CHANGE WILL QUADRUPLE IN 2050

The jar of happiness: how to create and use it ❯