The secret of farmed salmon, fed with chemicals to turn pink 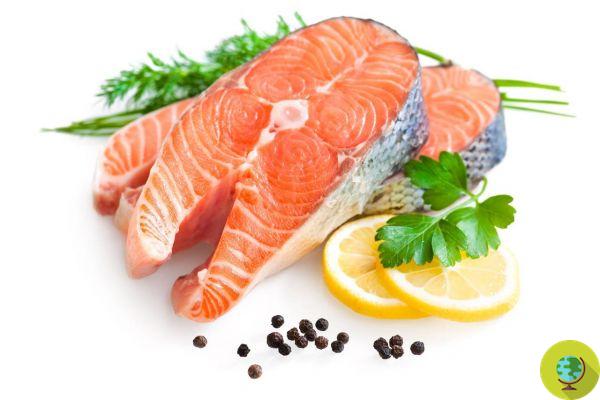 Farmed salmon have white meat because they don't eat shrimp and krill. A carotenoid is used to turn them pink

Does farmed salmon have naturally pink flesh? The answer is no. It would be white, but to make it appear pink, it is fed with feed that contains a synthetic substance capable of giving it the characteristic salmon color.


You may never have wondered how farmed salmon can be so pink, even though the fish are not free to feed on shrimp and krill which contain carotenoids and naturally give them that color.

The answer is simple: farmed salmon are fed with certain substances that transform their meat into the color we all know.

The flesh of these fish in captivity would naturally be white or greyish but, since the consumer prefers it pink, associating it with this species, a specific substance is administered in the farms. This is theastaxanthin.

As the farmers themselves admit, despite the fact that consumers eat other types of white fish, they expect salmon to have its characteristic color even if it comes from a farm and that is why chemical carotenoids are used.

“If we didn't, customers wouldn't buy it. Consumers buy what they know, what they are comfortable with. They won't go into the shop to buy white salmon ”.

In short, the pink meat of farmed salmon is fictitious, as a recent installation by two artists also denounced.

Read also: The dark side of the “salmon pink” that is not pink: the artistic installation that denounces intensive farming

Astaxanthin, however, according to farmers, is also useful in keeping farmed salmon healthy thanks to its antioxidant abilities and other properties it possesses.

But the addition of this substance really seems to be the lesser evil compared to the many cruelties to which salmon are subjected on farms. Here the fish live in narrow pools, all piled up, often in waters polluted by pesticides and fed with industrial food. Conditions that inevitably expose them to infections, diseases and malformations.

Regardless of the color of their meat, therefore, we remind you that real atrocities take place inside salmon farms, which were recently also filmed by the international organization Compassion in World Farming.

Read also: Film for the first time the atrocities behind the salmon that ends up in your sushi

The secret of the tobacco lobby: cigarettes sold in Africa are more toxic ❯

add a comment of The secret of farmed salmon, fed with chemicals to turn pink