The sauna protects the brain from dementia 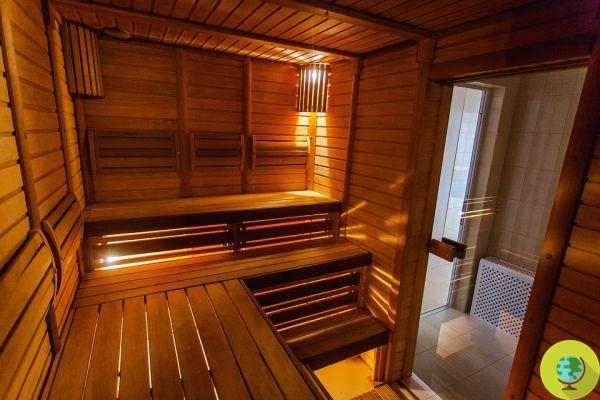 According to a new Finnish study, the sauna would protect against dementia.

Sauna and dementia. What do they have in common? The former would protect from the latter. To support it are, needless to say, the Finns, who with the sauna, you know, go hand in hand.

According to them heat baths would have beneficial effects on the brain.

Useful, therefore, not only to expel toxins from the body and to help purification, the sauna, if done daily, also protects us from dementia.

A group of researchers from the University of Eastern Finland in the Finnish city of Kuopio, led by Professor Jari Laukkanen from the Institute of Public Health and Clinical Nutrition, conducted a search on the data of 2314 adult Finnish men (aged 42 to 60) already recruited. between 1984 and 1989 in the Finnish Kuopio Ischemic Heart Disease Risk Factor Study, a cohort study on cardiovascular risk.

About twenty years after the first data collection on the subjects, follow-up showed that those who took the sauna 4 to 7 times a week had a 66% chance of being diagnosed with dementia less than those who only took the sauna once in a week.

Based on their lifestyle habits, the participants were divided into three groups: those who took the sauna once a week, those who did 2-3 and those who did 4-7 in a week. Taking into account the various risk factors for Alzheimer's, it emerged that the greater the number of saunas, the lower the likelihood of a diagnosis of dementia: with 4-7 saunas per week it was found that the risk of any form of dementia it was 66% lower and the risk of Alzheimer's disease 65% compared to those who took a sauna per week.

Could the sauna therefore be considered a recommended intervention to prevent or delay the onset of memory problems? Likely, but experts believe further evaluation is needed. In any case, for us who are not Finns, the sauna - especially on a daily basis - is a bit out of our habits and out of our reach. Preventing dementia? From coffee to singing passing through the monitoring of blood pressure and diabetes: according to many studies it is possible to counteract senile dementia, the important thing is, perhaps, find relaxation and serenity in all possible forms.

And, if you go to the sauna, remember that it is not recommended for those suffering from low blood pressure, in case of cardio-circulatory or respiratory problems, if you have a fever, inflammation, during menstruation or during pregnancy. It is also important not to start a sauna with a full stomach or after drinking coffee and tea, stimulating drinks that could cause tachycardia.

Science has discovered the origin of armpit odor ❯

add a comment of The sauna protects the brain from dementia