The receipts contain Bisphenol A: is there a danger to health? 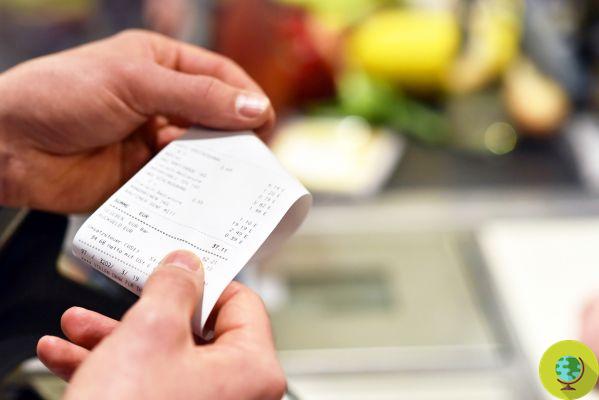 Receipts printed on thermal paper contain Bisphenol A, which is potentially harmful to health


From a recent American research published in JAMA, it emerged that the receipts that we commonly handle in supermarkets, bars and shops are potentially harmful to human health as the thermal paper they are made of contains Bisphenol A (Bpa).

What researchers at the Cincinnati Children's Hospital Medical Center in the United States, led by Shelley Ehrlich, noticed is that those who handle receipts daily without using gloves have higher levels of Bpa in their urine (it must be said, however, that this substance was still present even before exposure to thermal paper in 83% of cases).

The study was conducted on 24 volunteers, who held them continuously for 2 hours receipts printed on thermal paper. Once using the gloves and once without, after the time it was seen that, not using the gloves, the levels of Bpa in the urine were worryingly increased.

Exposure to Bisphenol A was correlated by experts to various health problems, including damage to the reproductive system and neurological development of infants who have come into contact with this substance.

What worries scholars is not so much a sporadic contact with shop receipts, but rather prolonged exposure to the substances contained in them as occurs in the case of cashiers who handle receipts full time.

As always, "a larger study is needed to confirm the results and evaluate their clinical implications" stated the researchers who among other things underline how "exposure to Bpa occurs mainly through diet, for example the consumption of foods in box".

- Not only Bisphenol A: the "dirty dozen" of endocrine disruptors

- Bisphenol S: is the Bisphenol A substitute equally harmful?

- The 10 toxic substances that lurk in our homes

There is too much salt in "healthy" snacks, more than chips, peanuts and even sea water ❯

add a comment of The receipts contain Bisphenol A: is there a danger to health?