The raft: the Buddhist tale that teaches us how to overcome the past

The art of not wasting one's life and practicing non-attachment both to material things and to a past that can never return, is well explained in Buddhism in the tale of the raft.

The art of not wasting one's life and practicing non-attachment both to material things and to a past that can never return, is well explained in Buddhism in the tale of the raft.


To live well, it is necessary to leave behind what does not make us peaceful and open up to the new without carrying ballast. To explain the importance of practicing detachment from people and things, Buddha tells this story.

Protagonists are a man and a raft that symbolizes what from which we should separate along the path of our life.

The tale of the raft

“Suppose a man is facing a large river and has to cross it to reach the other bank, but there is no boat to do it, what will he do? He cuts some trees, ties them together and builds a raft.

Then he sits on the raft and using his hands or with the help of a stick, he moves to cross the river. Once you reach the other side, what does she do? He abandons the raft because he no longer needs it. What he would never do, thinking about how useful it had been, is to load her onto her shoulders and continue the journey with her on his back.

Likewise, my teachings are only a means to an end, they are a raft that will transport you to the other shore. They are not a goal in themselves, but a means to obtain enlightenment ”.

And this would be the ideal condition, that is, once we no longer need it and once we have reached the goal we want, the most normal thing to do would be to abandon the raft. 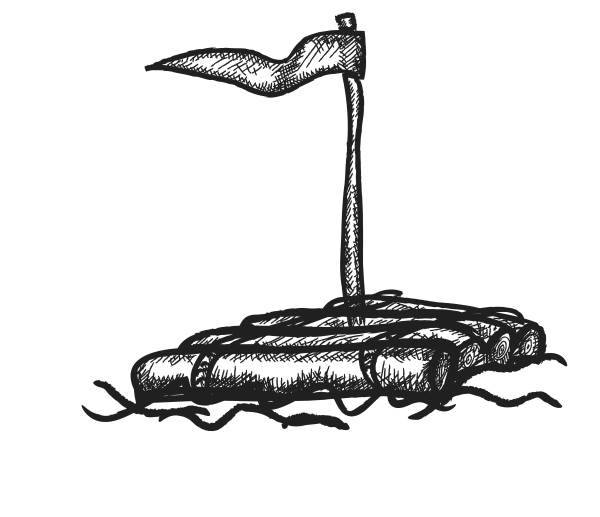 But some people get on the raft and don't row, forgetting that they have to get to the other side. They end up losing perspective even before starting their journey. So they focus on the raft to make it more comfortable: they build walls, the roof, they furnish it.

That is, they turn the raft into a house and tie it firmly to the shore. They don't want to hear about letting go of the lines or hoisting the anchor.

“Other people stop and stare at the raft from the shore and say, 'What a beautiful raft, it's big and solid.' They take the tape measure and measure it. They know exactly what its size is, the type of wood it is built with and where and when it was built. Some go further and create a technical sheet that is used to sell wholesale rafts. But no matter how many rafts they sell, they never got on one and never even thought of crossing the river. “It's too risky,” they think, ”explains the Buddhist tale.

There are still people who stay ashore to build a raft bigger and safer, so as to face the journey without danger. But it happens that they stay ashore making considerations, arguing and getting angry, so they don't go anywhere.

“Some people think the raft is too simple, rustic and unattractive. They look at her and shake their heads. “It looks like a bundle of loosely tied logs. So they decide to embellish it, paint it, decorate it and cover it with flowers, but they never manage to get on it, let alone think of rowing to the other shore ".

And then Buddha explains:

“The shore we are on is the present, the existence linked to the ego, the other shore is what we aspire to be, it represents our goals and dreams. The raft helps us to cross the waters, this is its function, but afterwards we have to abandon it ”.

Thus the raft becomes the symbol of everything that in the past and in the present has served us to get somewhere else, but we must learn to abandon it, not to keep it on our back.

The raft does not only refer to material possessions, it is everything that binds us and prevents us from reaching our full potential: it can be interpersonal relationships that have lost their raison d'etre or even certain personality traits or beliefs that hold us. related.

The story in summary tells us about our tendency to cling to things and situations, ending up wasting our life. Sometimes it is done out of fear, but change is part of everyday life and it is necessary to find out what is on the other shore.

Can vitamin C be useful in the treatment of Covid-19? Only if it gets to the cells ❯

add a comment of The raft: the Buddhist tale that teaches us how to overcome the past