Thanks to a visual test, a new study has found that depressed people see the world around them differently

It is well known that depression can create a series of collateral problems in people's lives, but a new study now shows how it can also change the way we see the world, not in a metaphorical sense but in a physical sense.


New research led by a team from the University of Helsinki and published in the Journal of Psychiatry and Neuroscience suggests that people who are going through a time of depression see the world around them differently.

The researchers carried out the study with the aim of analyzing how the cerebral cortex, responsible for receiving messages from the five senses, manages an optical illusion, subjecting to a visual test 111 people who were experiencing depressive episodes and 29 people who did not know instead. the Depression. 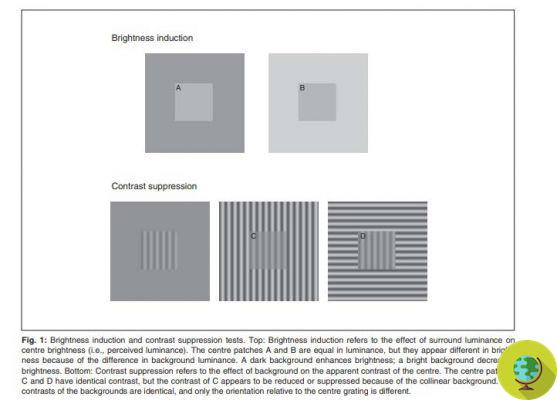 “The surprise was that depressed patients perceived the contrast of the images displayed differently from non-depressed individuals,” said psychologist Viljami Salmela, of the University of Helsinki in Finland.

In practice, it was noted that the brains of depressed people were more likely to focus on the contrasting part of the illusion.

In their paper, the researchers explain that:

As the authors explained, it is possible that a weaker contrast signal is transmitted from the retina to the cortex in people with depression, although more research will be needed to understand exactly what happens in the information sent by the eyes and / or how it is sent. processed by the brain.

Similar results were also seen in people with schizophrenia and bipolar disorder, suggesting that this type of change in how the eyes and brain perceive the outside world could be common to several psychological disorders.

The team hopes that a better understanding of how visual information is processed in the brains of depressed people can help find new treatments.

However, even this study has some limitations: the team used the reports provided by the participants about what they saw rather than brain scans. It is also possible that medications for depression may affect some of the changes noted in visual processing.

It is therefore more necessary than ever to investigate further with new research to confirm this theory.

Fonte: University of Helsinki / Journal of Psychiatry and Neuroscience