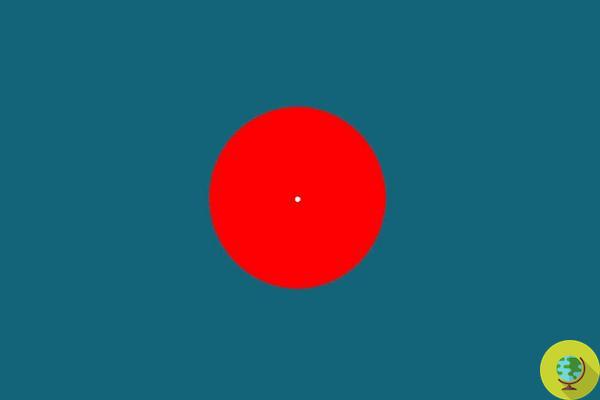 True cyan blue can be seen in real life but hardly ever on a monitor, except for this optical illusion.

On the web it goes crazy an optical illusion thanks to which our eyes would be able to perceive the true cyan. Subtractive primary color that we can see in reality, but that phones, TVs and computer monitors can hardly show in its pure form. And that in RGB coding, is achieved by combining blue and green.


The optical illusion went viral after being posted on TikTok by Kate Bacon.

But how does it work? It is necessary to fix the white point positioned in the center of the red circle for the entire duration of a piece of music. Following the instructions to the letter, you should eventually see a bright blue sphere corresponding to true cyan.

The afterimage would be the result of the residual activity of nerve cells in the back of the eye, as IFL Science explains, stating that "most humans perceive color through three types of cone cells in the retina, each of which responds to different wavelengths of light. If you stare at a bright color (red, for example) for a while, the cones responsible for collecting red will eventually become over-stimulated, depleted and desensitized. When you look away, the less depleted cone cells remain "fully charged" and overcompensate for the depleted cone cell, resulting in the perception of an image with colors reversed from the original. "

About the "after-image" phenomenon, Ajay Kuriyan, an ophthalmologist at the University of Rochester Medical Center, told IFL Sciences:

“If you stare at one color for a while, the cones that respond to that color become refractory for a short period of time so that the other colored cones are stimulated. This is the principle that guides the afterimage. "

You just have to try!