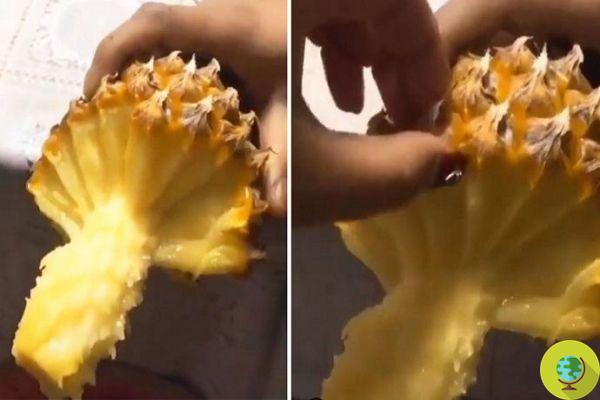 How do you really peel a pineapple? Get ready, you are about to receive some shocking news, the real coup de grace after knowing that Santa Claus does not exist.

How do you really peel a pineapple? Get ready, you are about to receive some shocking news, the real coup de grace after knowing that Santa Claus does not exist.


Nobody knows, but there would be an amazing way to eat the luscious tropical fruit. If you've always cut it into slices to serve on a plate, well, there's another much simpler way, which is literally driving the web crazy.

This practice consists of taking a whole pineapple and pull out pieces directly from the center of the fruit, without removing the peel, to taste it little by little. This is shown in a video that immortalizes the feat posted on Twitter by Dennis Naghizadeh.

Needless to say, people all over the world have gone mad and are attempting to replicate this same feat, with varying degrees of success.

Thus began the pineapple craze, to the cry of the hashtag #pineapplehack.

#pineapplehack. Does it really work?

These two videos have inspired an infinite number of attempts to extract the pulp from the whole fruit by pulling it away ... But the results have always been unsuccessful

Y’all be lying like shit on here. That pineapple shit don’t work. pic.twitter.com/hN7SLFgL80

I’m testing the pineapple hack and it better work ? pic.twitter.com/qLn52M3WEQ

Tried out the #pineapplehack for myself and can confirm that it works, but you need quite a ripe pineapple, and consider rolling it across the bench first to loosen the fibres. ??‍♀️ pic.twitter.com/YgdC3v5GRR

Because? Some "hackers" suggest that pineapple must be super ripe for "the trick" to work. It would help to slam the fruit on a hard surface before starting.

You just have to try to find out!

Now everyone wants a pineapple to 'pull'!

Pineapple: everything you ever wanted to know and never dared to ask