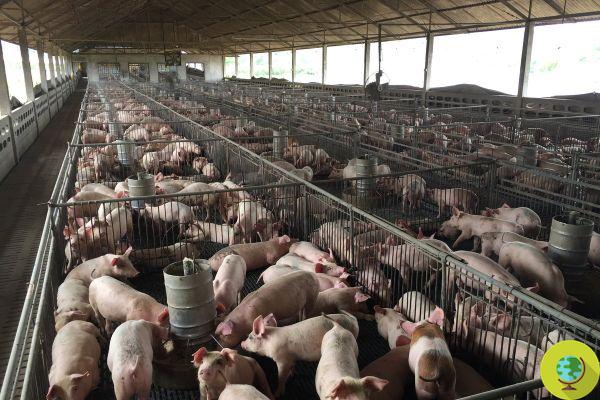 It is descended from the H1N1 swine flu which caused a pandemic in 2009. It is called G4 and shows "all the hallmarks of a candidate pandemic virus"

It is genetically descended from the H1N1 swine flu which caused a pandemic in 2009. It is called G4 and shows "all the essential hallmarks of a candidate pandemic virus". This is what a team of Chinese scientists has revealed, who have discovered a new type of swine flu capable of infecting humans and potentially capable of causing a future pandemic.


Another aspect is of concern: considering the sample of the study, the virus managed to infect over 10% of workers working in intensive pig farms.

The last thing the world, still struggling with coronavirus, needs but a team of Chinese scientists has identified a strain of flu that affects pigs but can also pass to humans. And it has already done so by involving above all the workers who operate in intensive livestock farming.

So is the terrible life of a pig in factory farms: the touching short of 12 minutes in streaming for free

The study, published in the scientific journal Proceedings of the National Academy of Sciences (PNAS), started from one consideration: pigs are considered important hosts for the generation of pandemic influenza viruses. This is why surveillance of influenza viruses in pigs is essential for early warning and preparedness for a potential future pandemic.

As part of a project to identify potential strains of pandemic influenza, the team led by Liu Jinhua of China Agricultural University (CAU) analyzed around 30.000 nasal swabs taken from pigs in slaughterhouses in 10 Chinese provinces and another 1000 swabs from pigs with symptoms. respirators. The swabs, collected between 2011 and 2018, produced 179 swine flu viruses, most of which were G4.

For the study, therefore, the scientists monitored the various types of swine flu for 8 years and identified a Eurasian-type G1 virus. This is the "predominant genotype in circulation in pigs found in at least 10 provinces," they write.

The virus is a unique blend of three lineages: one similar to strains found in European and Asian birds, the H1N1 strain that caused the 2009 pandemic, and a North American H1N1 that has genes from the avian, human and swine flu viruses.

Sun Honglei, first author of the paper, explained that the inclusion of G4 genes from the 1 H1N2009 pandemic "could promote the adaptation of the virus" leading to human-to-human transmission. Therefore, "it is necessary to strengthen surveillance" of Chinese pigs for influenza viruses.

Unfortunately, G4 already seems to have infected humans in China. In the provinces of Hebei and Shandong, both places with a high number of pigs, more than 10% of the workers working on farms.

The easiest way of transmission, from pig to man, therefore seems to pass through farms and slaughterhouses, once again raising many doubts. It has been repeatedly shown that pigs in intensive farms live huddled in small spaces, often forced to sleep and move among their own excrements. In such confined environments, contagion is even easier, increasing the risks for human health as well.

In China, Pig Hotels are becoming more and more popular, real skyscrapers capable of hosting tens of thousands of pigs. However, this solution found resistance in Europe for two reasons: on the one hand, the population opposed intensive farming, on the other, the high costs and the risk of epidemics were a source of concern.

Intensive farming, vulnerable to pandemics and guilty of creating them ...

Pig Hotels: in China, intensive pig farming in high-rise buildings up to 13 floors

In addition to the problem related to farms, scientists explain that the variant G4 is of particular concern because its core is an avian flu virus, towards which humans have no immunity. Despite being a descendant of the old swine flu, scientists have noted that it is resistant to flu vaccines:

"Pre-existing population immunity does not provide protection against G4 viruses"

"From the data presented, it appears that this is a swine flu virus that is poised to emerge in humans," says Edward Holmes, an evolutionary biologist at the University of Sydney who studies pathogens. "Clearly this situation needs to be monitored very carefully."

The discovery of the virus, however, should not alarm us further. Various scientists call for caution by explaining that even if the virus has all the credentials to pass to humans and cause a pandemic, this does not mean that it will happen. Robert Webster, scientist at St. Jude's hospital said:

"We just don't know that a pandemic will occur until it happens."

For Martha Nelson, an evolutionary biologist at the Fogarty International Center of the National Institutes of Health in the United States who studies swine flu viruses in the United States and their spread to humans, "lThe likelihood of this particular variant causing a pandemic is low". According to Nelson, it is difficult to know whether diffusion will be a growing problem given the relatively small sample size. "

Dr. Angela Rasmussen, a virologist at Columbia University's School of Public Health, also suggested not to be alarmed prematurely:

"Our understanding of what a potential pandemic flu strain is is limited," he tweeted. "Sure, this virus meets many of the basic criteria but it's not sure if it will cause a hypothetical influenza pandemic in 2020."

So the bottom line is that our understanding of what is a potential pandemic influenza strain is limited. Sure, this virus meets a lot of the basic criteria but it's not for sure going to cause a hypothetical 2020 flu pandemic, or even be a dominant strain in humans.

Furthermore, Dr. Rasmussen specifies that "there is no evidence that G4 circulates in humans, despite five years of extensive exposure".

So are we facing the start of a double pandemic, COVID + influenza?

There's no evidence that G4 is circulating in humans, despite five years of extensive exposure. That's the key context to keep in mind.

"We will take all necessary measures to prevent the spread and outbreak of any virus".

As early as 2009, China had attempted to contain the spread of H1N1 by limiting flights arriving from affected countries and quarantining thousands of people.