The most effective meditation of medicines on Alzheimer's patients. The Indian study 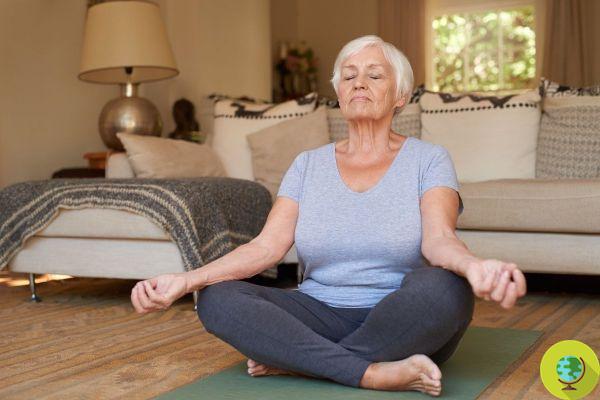 Meditation can help concentration and memory skills in older people with conditions such as Alzheimer's and MCI.

A recent Indian study demonstrates how the constant practice of meditation can help concentration and memory skills in older people with degenerative pathologies of the mind such as Alzheimer's and MCI.


Il mild cognitive disorder (Mild Cognitive Impairment, o MCI) e l’Alzheimer are pathologies that affect older people. These are conditions in which the memory progressively deteriorates, but the person remains independent from the point of view of physical functions.

According to a new study conducted by Indian researchers, frequent meditation practice would be a valuable aid in improving attention, awareness and mental health. The researchers observed the beneficial effects of intentional meditation on MCI and Alzheimer's patients in terms of memory, language skills and perception of space. Indeed, among the various treatments tested for the treatment of these pathologies, meditation represents the only non-invasive and inexpensive approach to bring concrete relief to the sick.

(Read also: Meditate: 10 scientifically proven reasons to do it at least 10 minutes a day)

The Indian study was divided into two phases. A first phase was aimed at exploring the neural correlations activated by meditation and studying the improvement in the activation of brain regions in those who have practiced meditation for years and in people who are healthy but not used to the practice. To do this, a method of investigation called image biomarkers (used to observe brain deterioration in cases of dementia) was used.

The second phase, on the other hand, observed the changes in the cognitive performance of MCI patients before and after the meditative treatment. The team of researchers proposed, each day, one hour of memory and cognitive skills training exercises and observed the patients' responses at the end of the training week (patients were also given exercises to repeat on their own at home).

Additionally, the researchers developed a ten-week intentional meditation program called 'Mindfulness Unified Cognitive Behaviour Therapy (MUCBT) '. Compared to patients of the same age and with the same health problems who have not practiced meditation, those who have carried out this program have shown a better ability to concentrate, a more effective response to stress and environmental stimuli. In particular, the results of the second phase of the test suggest that the awareness deriving from meditation can activate neural connections concerning attention, behavior, ability to react, adaptation to the environment.

Premature menopause, before age 40, increases the risk of this serious disease in old age ❯

add a comment of The most effective meditation of medicines on Alzheimer's patients. The Indian study