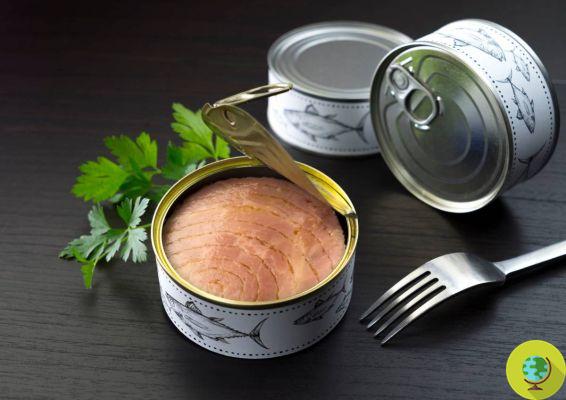 Canned tuna is a good source of Omega 3, easy to find and cheap. However, it is not the only one, there are many plant alternatives

Canned tuna is a commonly used product, cheap (especially when compared to fresh fish) and available everywhere. All features that make it highly appreciated by consumers but there are other aspects to consider, the most important is undoubtedly a side effect that is often not thought of: the presence of mercury.


Among the cheapest sources of lean protein that you can buy at the supermarket is canned tuna which, in addition to its long shelf life, is often appreciated as a source of Omega 3 fatty acids. This is why many consider it a healthy food. .

According to the National Institutes of Health Office of Dietary Supplements, Omega 3s are a source of polyunsaturated fats that promote the health of our body: they are beneficial for the eyes and brain, have anti-inflammatory properties and can even provide the body with energy for all the day. Omega 3s contain eicosanoids, molecules that promote cardiovascular, pulmonary, immune and endocrine health.

Harvard Health points out that Omega 3s cannot be produced by the body alone and, since they are essential fats that our body needs to function, we must ensure a good dose of these substances through proper nutrition.

Omega 3s are present in foods such as fish (including canned tuna) but also in plant foods such as walnuts, flax seeds, seed oil and green leafy vegetables.

But isn't eating fat bad for you? This is a bit of a false myth, at least in the case of "good" fats that must be part of a healthy and balanced diet as they provide energy and aid digestion by promoting a sense of fullness.

Canned tuna is just one possible source of Omega 3 fatty acids that can be added to our diet at a relatively inexpensive price, and an 85-gram serving of tuna contains 1,5 grams of Omega 3, according to the Cleveland Clinic. So, if you eat one can of tuna a week, you may be getting all the Omega 3 fatty acids you need.

But in the face of all this there are some possible side effects (Read also: 6 good reasons for choosing not to eat tuna), the most relevant is undoubtedly the presence of mercury. In fact, it is known that large and longer-lived fish, for the simple fact that they have more time to accumulate the substance in their body, are potentially more contaminated by mercury, a toxic substance that can cause neurological disorders in humans.

Numerous scientific studies have highlighted the mercury contamination of tuna and also a greater presence of this metal in the human body than those who frequently consume tuna.

We can cite, for example, a research of 2019, conducted on a group of university students to evaluate their exposure to mercury from the consumption of tuna. The results showed that the total mercury levels in the hair of those who frequently consumed tuna (more than half, 54% of the sample said they ate 3 or more servings of tuna per week) were higher than those of students who did not consume. this food.

Another study, on the other hand, analyzed 108 samples of tuna, canned or unprocessed, tested at the laboratory of the Experimental Zooprophylactic Institute of Puglia and Basilicata. Twelve samples of tuna, in this case fresh (11% of the total), showed a mercury content above the permitted level. The average concentrations of mercury in fresh and canned tuna (0,517 and 0,207 mg kg-1, respectively), the authors write, confirm that this element represents a serious toxicological problem.

"Mercury exposure due to tuna consumption was significant and may pose a risk to the most sensitive consumer groups (ie children)" reads the abstract of the study.

Other possible contraindications to the consumption of tuna are:

Considering all this, we advise against eating tuna, as there are many other sources of Omega 3 fatty acids, also suitable for those who follow a vegetarian or vegan diet.

If you want to know more about the most important plant sources of Omega 3, read also:

And what about the oil contained in the tuna? Is reusing it a good idea? Here you will find what the nutritionist Flavio Pettirossi told us about it.

If you consume tuna, also remember to never make this mistake.