The mosquito carrying diseases such as zika and yellow fever is also likely to arrive in Europe. If surveillance and prevention are not implemented in a timely manner, Aedes aegypti will inevitably spread to the outermost regions such as Madeira and the Canary Islands and could increase the risk of local outbreaks so far limited to more tropical climates.

A claim that follows recent discoveries about the new settlements of Aedes aegypti, the main vector species of dengue, chikungunya, Zika and yellow fever.

In fact, in December 2017, officials from the Canary Islands region reported the presence of Aedes aegypti mosquitoes on the island of Fuerteventura, a more than popular destination for travelers. Aedes aegypti's return to Egypt was also confirmed earlier this year, which has faced dengue outbreaks locally around the Red Sea coast and related cases among European travelers in recent years.

Since 2007, the species has been established in the extreme Portuguese region of Madeira and throughout the Black Sea. In Madeira, Aedes aegypti was the vector of the 2012-2013 dengue outbreak, while recent VectorNet data shows that the species is it is now spreading further west along the Turkish Black Sea coast. 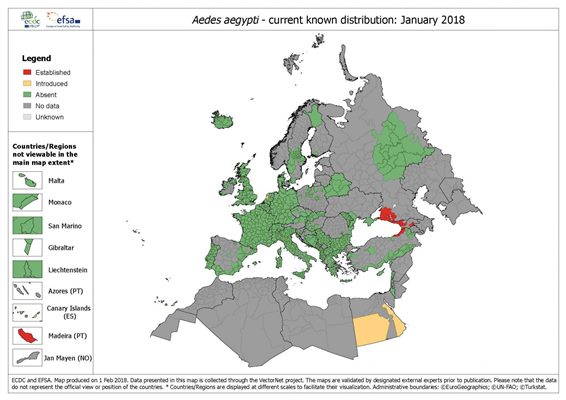 “If measures are not taken - experts say - the mosquito will most likely spread to the extreme areas of Europe, which could become a reservoir for the introduction of vectors to the continent. This would increase the risk of local virus outbreaks ”.

The Aegypti was endemic in southern Europe until the mid-900s and now the European climatic conditions allow for a proliferation in case of reintroduction.

What do we know about the Aedes aegypti mosquito

What is certain is that it is a kind of mosquito that it has adapted to people living in cities and which has therefore evolved to favor human blood. It generally attacks humans from behind, especially on the ankles and elbows and its bite from this mosquito is delicate, so much so that often one notices that it has been bitten only once the swelling and itching appear.

Furthermore, the Aegypti prefers to feed in small sips with the blood of different people and it is most likely why this mosquito exposes you more to the risk of spreading Zika or other diseases.

According to experts, Aedes aegypti breeders can form mainly in moist containers such as pots and dish plants, but also drinking troughs and gutters. Cans, plastic, bottles, tarpaulins and scrap are also referred to as "breeding sites". In this sense, constant environmental monitoring is essential to prevent the Zika virus insect from causing fear in the old continent.

As we explain here, insecticides are not the solution to the problem. Even if they are a means used above all to stem the spread peaks of potential Zika outbreaks, it is on other fronts that prevention should be taken. The sprays on the market, particularly the broad spectrum ones, can also kill bees, butterflies, fireflies and dragonflies, fundamental predators of both mosquito larvae and adults. Better to ask for the natural help of bats (large eaters of larvae and adult mosquitoes), for example by placing special houses in the garden to house them and eliminate the factors that allow the development of the insect and measures such as emptying the saucers of the plants or avoiding stagnant water.

The raft: the Buddhist tale that teaches us how to overcome the past ❯