The math anxiety? It exists and it is caused by parents and teachers 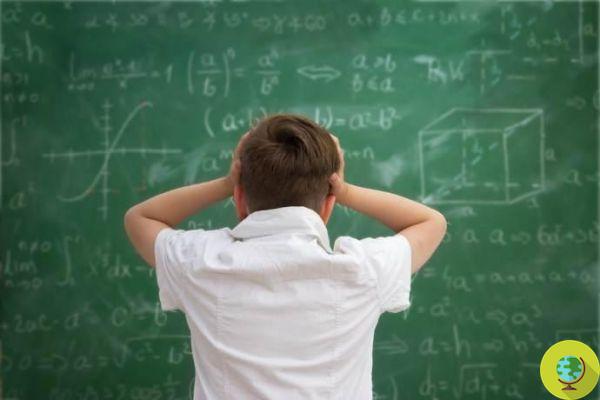 Babies and girls in the throes of a real "math anxiety": a series of authentic negative emotions related to the science of numbers that could also cause behavioral problems. Here is math anxiety.

Is there math anxiety? Of course yes. It has always been considered a difficult subject a priori and this makes adults and children feel perpetually in difficulty. Babies and girls in the throes of a real "math anxiety": a series of authentic negative emotions related to the science of numbers that could also cause behavioral problems. But what is it about? And who or what causes it?


To try to give an explanation are the researchers of the University of Cambridge, according to which one in ten children would suffer from "despair and anger" on the subject, so much so as to speak of real "national concern".
And in to pass it on would be parents and teachers.

The researchers interviewed 1.700 British students between the ages of 8 and 13 about their "feelings" towards mathematics and found that the 10% of the children suffered from math anxiety, which means that they had "overwhelming negative emotions" towards the subject ranging from "anger to despair".

The phenomenon of math anxiety is characterized by a "general sense of feeling the most difficult subject respects the others", resulting in a subsequent lack or loss of confidence.

“Many children and adults experience feelings of anxiety, apprehension, tension or discomfort when confronted with math. This could contribute to a relatively low level of numeracy among UK adults, 'experts say.

In short, from the report it would be clear that in boys and girls - girls are the most affected (and here the researchers speak of possible gender stereotypes) - various negative emotions connected to mathematics are frequent and the problem does not concern only who actually goes wrong. , but rather 77% of those who suffer from it have normal or good grades, even if in the long run that same anxiety then generates worse performances than you might have.

How then to cheer up our children? The first recommendation of scholars is addressed to teachers and parents.

“Teachers and parents too need to be aware that math anxiety affects performance and that their own anxiety can affect that of students and children. Gender stereotypes regarding math skills may also contribute to gender differences in performance. "

The ancient blessing that teaches us to be free ❯

add a comment of The math anxiety? It exists and it is caused by parents and teachers