The legend of the rainbow according to the Native Americans

How was the rainbow born? We all know that it is an optical and meteorological phenomenon, but we tell you the legend of the rainbow handed down by Native Americans.

How was the rainbow born? We all know that it is an optical and meteorological phenomenon that produces light when the sun passes through the drops of water, yet to give a little magic to this extraordinary spectacle, we tell the legend of the rainbow handed down by Native Americans.


The rainbow is a phenomenon that always amazes us, no matter how many times we have seen it, we will continue to be enchanted. There are many legends about his birth, the one told to children is usually the quarrel between colors, we want to tell you about the one handed down by Native Americans.

The legend of the rainbow

One day, Mother Earth and Father Sun went to visit a lonely boy whose name was Atsosi Bagani.

"You must take a wife," said the Earth.
"You will go to look for a wife along a path unknown to men" added the Sun.

“You will marry the eldest of the Dobedeklad sisters, Those-Who-the-Sun-Does-Not-Light. They live in a pueblo. The birds have imprisoned them in darkness, envious of their beauty: you alone can free them of it. To help you, I will build a passage between your hut and the pueblo and transform the girls and you, so that the birds do not recognize you and peck you, ”continued the Sun.

Thus, a gigantic arch formed by strips of brilliant colors emerged from the earth, rose very high into the sky and descended in the distance to the earth. When Atsosi Bagani walked over this bridge, he was transformed into a butterfly, whose colors mingled with those of the rainbow.

The birds did not notice and the butterfly man came to the roof of a large house and descended through a dark opening. In the dim light, he saw the two sisters busy weaving a magnificent rainbow-colored carpet, the patterns of which resembled rivers and mountains.

“Look, little sister - said the eldest - a butterfly has alighted at the top of the ladder”.

The younger sister, very excited, rushed towards the staircase and a ray of sunshine touched her, the older one tried to hold her back but both were attracted by the magical power of the sun's rays. On the roof, the butterfly transformed into the young man.

“The Sun sent me to look for you, you will be my wife and my sister”.

The birds saw them and rushed at them with screeching cries, but the Sun watched and turned the young into delicate butterflies, so the birds could not find the fugitives. Atsosi Bagani returned to his hut and the Sun and the Earth attended the wedding.

The young man continued to hunt, while the two sisters wove beautiful carpets. In the small sunlit hut, however, the two girls were homesick for their old dark home. Seeing them sad, the Sun said to them:

"If you so desire, you can see your gloomy home again, but now the birds have become wary and you must defend yourself." 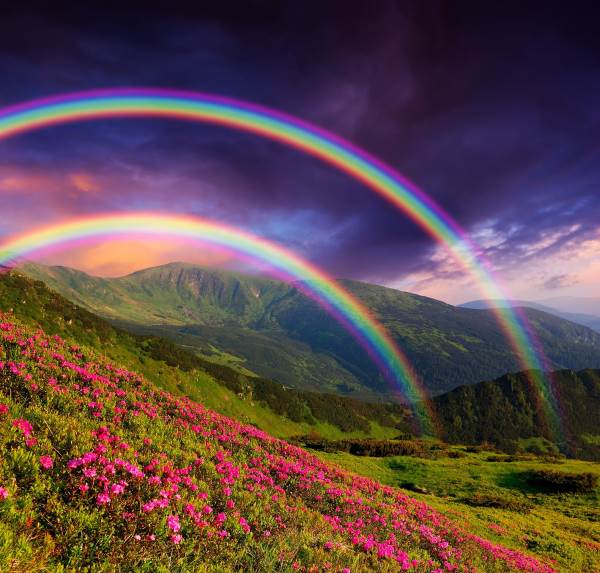 So before turning them into butterflies, he gave each two large hailstones, and when the birds attacked them, the older sister threw the first grain at them, which turned into a large black cloud that enveloped the birds.

The butterfly girls continued their flight, but soon the birds caught up with them and they had to throw the second hailstone, which turned into a pouring rain, then the third, which broke into thousands of small grains. But the hail stopped and the birds resumed chasing. The pueblo was in sight, but the butterflies weren't fast enough. They then had to throw the last grain, which inflamed the sky with lightning and thunder.

The birds ran away in fright and the girls were saved. The sisters returned from Atsosi Bagani, but whenever they felt homesick they visited their old home. Thus, after each storm, a rainbow forms between the pueblo and the young man's hut, which reconciles the world of darkness with the kingdom of the Sun. 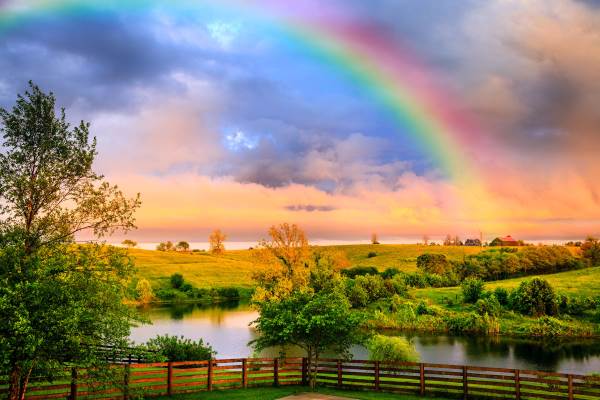 The meaning of the rainbow

The rainbow takes on different meanings related to divinities, to creation, but also to the connection between worlds, Not surprisingly, it is a perfect combination of colors. In Hindu and Buddhist tantra the rainbow is described as a body of light that emanates life, hope, transformation and harmony with the universe.