The legend of the passion flower and its spiritual significance 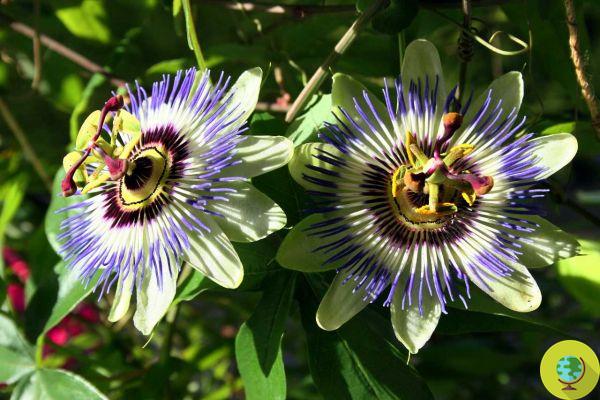 Passionflower is grown for decorative purposes, and behind its birth there are legends and spiritual symbols.

Passionflower is a plant that belongs to the Passifloraceae family which has over 600 species. It is cultivated for decorative purposes given its beautiful colors ranging from white to blue, up to purple and purple. Behind his birth there are legends and spiritual symbols.


We had already told you about the many property of passion flower which is usually used for the treatment and prevention of anxiety, distress and insomnia. The healing properties of passionflower were already known in ancient times by the Aztecs, who used it as a relaxing remedy. Even during the First World War, it had been used for the treatment of "war anxieties".

Its use can also be useful in cases of asthma, palpitations, attention deficit and high blood pressure. As for the passiflora edulis, remember that its fruit is edible, the passion fruit or passion fruit.

In the language of flowers and plants, passionflower is the symbol of religious faith because around his birth, some legends related to the spiritual symbol are based, here are two.

The first narrates that a wild plant grew next to the cross of Jesus. Suddenly his branches began to stretch towards the top of the cross and reached the bloody forehead of the Lord.

When the disciples Nicodemus and Joseph went to lift Jesus from the cross they saw that the little plant, wrapped around his head, was covered with strange motto flowers, inside which they could distinguish: the hammer, the nails, the crown of thorns. and other signs of the Passion of Jesus. They surprised those flowers and called them passiflore, that is, passion flowers.

The second legend with the same character tells that many years, when Spring Fairy arrived, all the plants at his touch woke up from the long winter sleep putting out buds, leaves and flowers. Only one plant woke up late and when it did, Spring was already far away.

The plant then prayed to Jesus to make it bloom like all other plants.
The Lord answered her: - Don't worry, you too will blossom.
When? The little plant asked anxiously.
One day ... and Jesus' eyes were veiled with sadness.

When Spring returned all the plants, even those of Golgotha, bloomed except for the nameless seedling. At a certain moment the wind carried the echo of tears, laments and screams. A man advanced through the screaming crowd, bent under the weight of a very heavy cross. His face was disfigured by pain and blood.
I would like to cry too as men cry, thought the plant with a shudder ...

At that moment Jesus passed her and a tear mixed with blood fell on the pitiful plant. Immediately she blossomed a strange flower, which bore in its corolla the instruments of the passion of Jesus: a crown, a hammer and nails. Thus a new flower was born: the passiflora or passion flower.

The legend of the passion flower

Another legend about the birth of passion flower, not related to the spiritual aspect, is that of Maracujà, a Spanish maid who had arrived in the Guaranì lands with her father.

Maracujah was not her first name, but the nickname given to her by an Aboriginal Guarani whom she secretly loved and secretly met, since her father would never approve of such a relationship. In fact, she was predestined to marry a captain. But the woman had no intention of marrying the captain and she pleaded with her father, crying day and night. But there was nothing to do even confined to the house.

Maracuja had to be content with seeing her beloved from the window of her room, as she was not allowed to go out into the gardens at night and could hardly evade her father's vigilance. However, she sent a maid to inform the boy of her grim future.

The young Guarani did not resign himself to losing his beloved, and every night he approached the house trying to see her. For hours he stared at the window playing the flute. Until, one evening, her beloved no longer heard that sound and she fell into her despair.

After several days, he saw the figure of an old Indian woman in the bushes. She was the mother of her lover, who, approaching the window, told him that the young man had been murdered by the captain, who had discovered the hidden story of her daughter.

Maracujah then ran out of the window and followed the woman to the place where the body of his beloved rested. Crazed with pain, she dug a grave with her own hands until she saw her loved one.

The woman then asked the old woman to kill her and put their bodies close. After hitting her with an arrow in the heart, the old woman realized that from that same arrow a strange flower was born, whose petals opened at night and opened with the sun: passion flower.