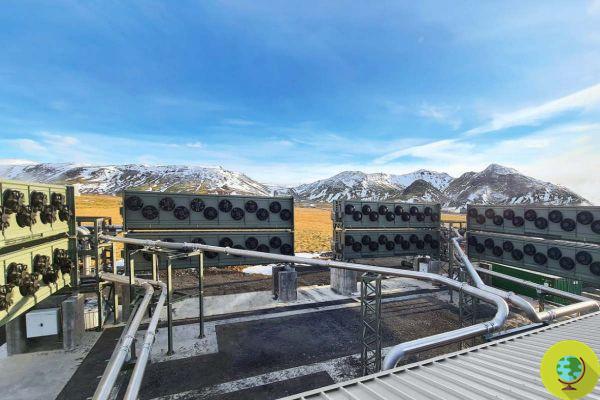 Near Reykjavik, Orca, the largest plant in the world capable of capturing carbon dioxide from the air, was launched yesterday

Is called Orca the largest plant in the world capable of sucking carbon dioxide from the air. And it is already a reality. The innovative machine, which takes its name from the Icelandic term orka (which means “energy”) was started yesterday for the first time in Iceland, near the capital Reykjavik. The Swiss start-up developed it weatherworks, which has set itself the goal of capturing 1% of global annual carbon dioxide emissions by 2025. For the time being, Orca is capable of absorbing up to 4000 tons of CO2 per year. A small but important step to combat the climate crisis.


Save the date ?️ and save the planet ?This Wednesday 8th September we will launch Orca, the world's first large-scale…

Posted by Climeworks on Monday, September 6, 2021

How the Orca plate works

Orca is an innovative plant (the largest ever built) for direct air capture and CO₂ storage. Construction of the Orca began in May 2020 and is based on advanced modular technology, in the form of innovative stackable collection units the size of a container.

These units are powerful and compact with a minimal physical footprint. This allowed Orca to be operational in less than 15 months - explain its creators - Compared to the previous technology, the use of steel in the collector units has been reduced by about half per production unit. Orca technology can be easily replicated in different locations around the world and on a large scale, flexibly wherever extensive renewable energy and storage conditions are available. Strategically located adjacent to ON Power's Hellisheiði geothermal power plant, Orca runs completely on renewable energy.

Thanks to the collaboration with Carbfix, an Icelandic CO2 storage project, the captured carbon dioxide is then mixed with the water to be pumped deep underground, through a process called mineralization.

In between thunderstorms, the sky provided a dramatic backdrop when we had the pleasure of welcoming renowned…

But how much energy is needed to capture the CO2 through the plant?

First of all, it should be clarified that the Swiss company only uses renewable energy, for example from waste. The expected energy consumption for a plant like Orca is about 2 kWh of heat and 650 kWh of electricity per ton of carbon dioxide captured, which would correspond to about a quarter of the energy consumed on average by an American household in a year.

How long does it take to build and a CO2 capture plant?

Climeworks currently has 15 machines in operation across Europe, some of which are sold to large companies. Building and installing a plant typically takes one to two years, and each machine has one duration of about 10 years, although Climeworks intends to make the next plants even more resistant to make them run longer.

Is it a safe technology?

The capture and storage of CO2 through the Orca plant appears to present no risk, even in the event of a fire.

The pioneering process of transforming carbon dioxide into stone is safe - explains Climeworks - It takes place through a combination of carbon dioxide capture from the air and rapid underground mineralization, a natural process whereby carbon dioxide reacts with the basaltic rock to become solid matter of calcite (another form of rock) within a few years. No weather conditions or fire can damage it or cause a carbon dioxide explosion: in this form of calcite the greenhouse gas is removed from the atmosphere permanently and safely. The basaltic conditions in Iceland's existing geothermal power plants make it one of the best places to start permanent storage of carbon dioxide.

In the Netherlands, photovoltaic noise barriers that produce energy ❯

In India it's getting hellishly hot like never before

At the Venice Film Festival, a short film on the climate crisis makes us reflect: this is what awaits us if we do not immediately do something

add a comment of The largest CO2 capture and storage facility has been inaugurated in Iceland. It absorbs up to 4000 tons of carbon dioxide per year