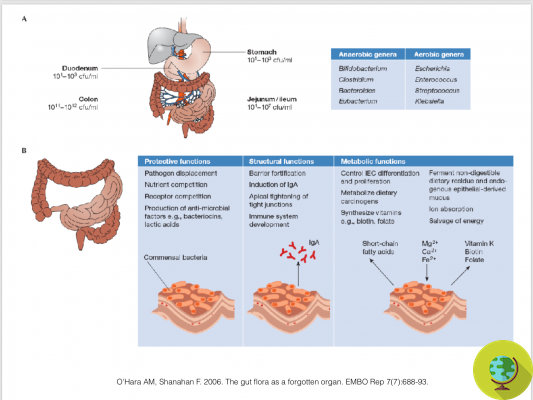 It is not the brain that governs our tastes in terms of food but directly the intestine through the bacteria that inhabit it. According to an American research

We have always thought that our tastes and our desire to eat some foods rather than others are natural facts to be attributed if ever to our genetics or to habits that date back to childhood. New research now highlights how i bacteria which are part of the intestinal flora are able to influence food tastes and the amount of food we feel the need.


To arrive at this conclusion was the study published in the journal Bioessays, conducted by a team of experts from Arizona State University, the University of California and that of New Mexico.

In the article, the experts explain how it is not the brain that directs our food preferences but rather what is now rightly considered the "Second brain", or the intestine. In particular, as the researchers explain, it is the intestinal bacterial flora that reigns supreme: “The bacteria present inside the intestine are manipulative. They have the ability to guide people's behavior and mood by altering the neural signals of the vagus nerve, changing taste receptors, producing toxins to make us feel bad and releasing chemical rewards to make us feel good, "said Athena Aktipis, coordinator of the study. .

The intestinal flora is composed of different types of bacteria, a real ecosystem, in which some of them prefer sugars, other proteins, others still fats. Sometimes the push is too strong and clear towards fats and sugars and this, according to scholars, could explain, at least in part, the appearance of overweight and obesity.

Researchers are convinced that by acting on these bacteria with gods specific probiotics for different situations it is possible in some way to also be able to modify people's diets and therefore prevent the most common problems.

- Lactic ferments: what they are, when to take them and which ones are effective

- Intestine: 10 tips to take care of it in the summer

Is dried fruit healthy? Does it raise your blood sugar? What do nutritionists think ❯

add a comment of The intestinal bacterial flora influences our tastes