The Happiness Curve: Find out at what age you will be happiest

Happiness? It can be represented with a graph: the U-shaped curve reveals the ages in which we feel most emotionally charged

Happiness? It can be represented through a graph: the 'U' shaped curve reveals the ages in which we feel most emotionally charged. This is established by researchers from the Universities of Melbourne and Warwick.


Happiness is closely related to age, at least according to science. There happiness curve it is precisely U-shaped: at 20 it has its highest peak, then begins to decline with the midlife crisis, and then rises again during old age.

The research analyzed seven different surveys, totaling a sample of 1,3 million people from 52 different countries. Their answers gave birth to a 'U' shaped chart: where start and end are high, mid waist low. It should be noted, the researchers say, that this does not mean that low levels indicate unhappiness, but they are less happiness.

It is no coincidence that the age coincides with the one in which we have so many responsibilities, concerns related to family, work, health, career. At the beginning of the graph there is the age of carefree, at the end that of old age which should be the moment in which the fruits of sacrifices are reaped and in which one has more time to devote oneself to one's hobbies and passions.

The curve of happiness

Let's see in detail how the happiness curve changes according to age groups. 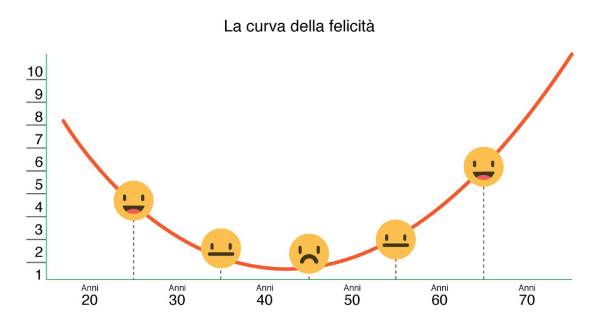 There is the age of childhood, that of adolescence, of university, of expectations for the future, in this range happiness depends on the search for new stimuli, social contacts

One feels with a great desire to fulfill oneself, but there is the weight of responsibilities, worries and one tends to be less deluded, therefore apparently less happy.

The period of the balances in which we ask ourselves where we have arrived and if what we have achieved is really what we hoped for.

It is a somewhat stalemate phase: the missed opportunities become less pressing and the phase of rebirth and awareness begins in which serenity is regained.

The peak of happiness returns, you feel free to cultivate your interests and to face this particular phase of life in a very serene way.

add a comment of The Happiness Curve: Find out at what age you will be happiest