The free app that helps you resist junk food and lose weight by playing, created by Finnish scientists

Researchers at the University of Exeter have developed an app that helps you consume less junk food and lose weight.

Researchers at the University of Exeter have developed an app that helps you consume less junk food and lose weight.


It's called Food Trainer and it's a new mobile application that helps people eat better and, consequently, lose weight by helping them choose the healthiest foods. The software, developed in the form of an interactive game, is the result of a collaboration between the universities of Exeter and Helsinki and aims to reduce the daily consumption of junk food. 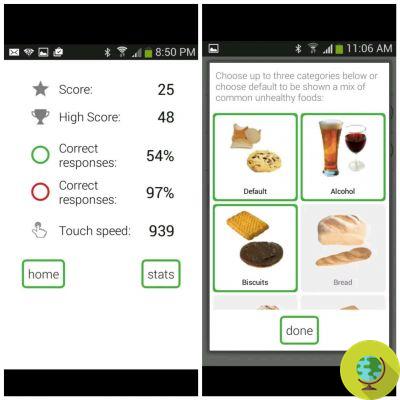 The app was tested on 1.234 participants who used it for at least ten times and who followed its recommendations. All volunteers recorded an average weight loss of half a kilo and a small improvement in their eating habits - for example, those who used to consume junk food two to four times a week reduced the frequency to once a week. after one month of using the app.

Overall, the results are very encouraging. The app is free to download and the game requires a commitment of about four minutes a day, a reasonable time - explains the professor Natalia Lawrence, of the University of Exeter. - There is also evidence that the benefits deriving from the use of this app are more evident in the most overweight people, and this was what we hoped to see, because this app is mainly dedicated to unhinging the mechanisms that lead to obesity, such as craving and consuming junk food.

The app also provides a database of useful information for developers: in fact, those who use it are periodically subjected to questionnaires on the frequency of consumption of certain foods, along with other information such as weight and age. The results showed that regular use of the application is linked to wider changes in eating habits.

If you're trying to teach the brain something new, it's a good idea to 'smear' the learning at various points - adds Dr. Matthias Aulbach, of the University of Helsinki. - It can be useful to use the app in different contexts, not only at home, but also at work or elsewhere, so that the associations learned are not limited to a single environment. From the results collected so far, it seems important that the app is used regularly and without interruptions, so we recommend customizing it as much as possible, so that the use does not become boring.

The rainbow of fruit and vegetables: properties based on color ❯

add a comment of The free app that helps you resist junk food and lose weight by playing, created by Finnish scientists