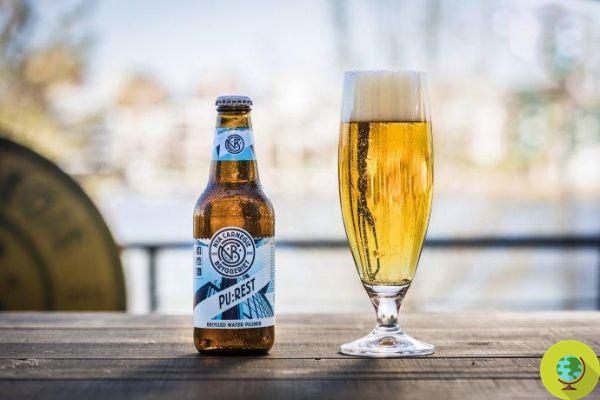 In Sweden, a Stockholm brewery has launched a new beer, called PU: REST, made with recycled wastewater

A beer brewed using wastewater. This is no joke but it happened in Sweden where a Stockholm brewery launched a new beer, called PU: REST, made with recycled wastewater.


Produced by the New Carnegie Brewery in collaboration with the Swedish Environmental Research Institute (IVL) and Carlsberg, the new beer was designed not only to quench the thirst of drink lovers but also to send a very specific message: "second-hand" water it can be as clean as that of the tap.

According to the Swedish Environmental Research Institute, the challenge of getting people to drink recycled water is not technological but psychological, so what better way to convince them of the purity of treated wastewater than to use it to create a beer?

The water used for PU: REST comes from Hamarby Sjöstadsverk, where it has been treated in a long chain of purification steps. After careful quality testing, the water was delivered to the New Carnegie Brewery.

PU: REST it was launched in Sweden on May 25 and has already been ironically dubbed "crap beer" on social media, but its creators hope it will help change the general opinion on recycled wastewater.

“The difficulty in obtaining this relatively inexpensive and energy efficient method to use for the production of drinking water is not technical but above all emotional,” said Staffan Filipsson, project manager at IVL. "Recycled water is as pure and safe as regular tap water, but most people are still skeptical about actually consuming purified wastewater."

PU: According to its creators, REST has a very clean and fresh taste but judging by those who have tried it, they are not enthusiastic about it. Currently it can only be drunk at the New Carnegie Brewery in Stockholm but from 2 July it will be sold throughout Sweden.

What its creators want to demonstrate is that in a world threatened by water scarcity, technologies exist to recycle wastewater and turn it back into drinking water. You just need to believe it.

Would you drink it?

The psychology of the carnivore: this is why we continue to eat animals (# festivalveg2013) ❯