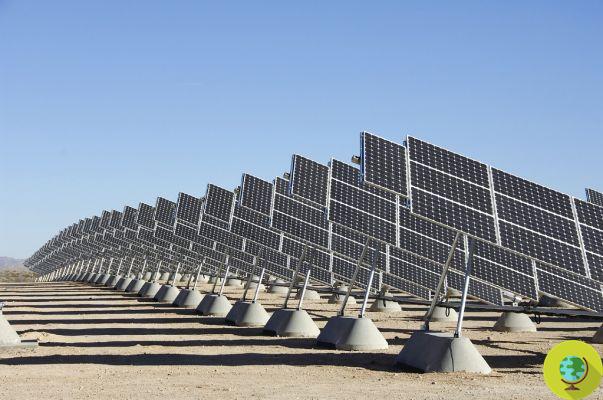 In an attempt to solve similar problems, the Abu Dhabi Development Agency is currently testing a new solar-powered industrial desalination system. The main objective is to improve the yield of solar panels, which in desert areas have a difficult life for various reasons, including the temperature difference between day and night, very high temperatures, the damaging action of sand and so on.

In United Arab Emirates, as in many other countries a desert climate, part of the drinking water supply is guaranteed by plants desalination, which allow to eliminate the sodium chloride (salt, in fact) and other dissolved substances. This process is made possible by industrial plants which, as usual, are powered by fossil sources traditional (although, as we have seen, there are those who have put on the market portable devices a solar power). Such desalination systemshowever, they require a very large consumption of energy, as well as increasing the salinity of the marine waters in which they operate.

The main goal is to improve the yield of solar panels, which in desert areas have a difficult life for various reasons, including it thermal shock between day and night, the very high temperatures, the harmful action of sand and so on. Hameen e Sweihan are the two pilot sites of these experimental plants, capable of producing something like 1050 Kw of electricity renewable each Now (it's about 30 units of 35 Kw / h moon).

The system "zero carbon”, However, if on the one hand it cuts down on the consumption of traditional fossil sources, on the other hand, it leaves the problem ofenvironmental impact. In Persian Gulf, for example, the concentration of salt is increasing dramatically, compared to a decrease in rainfall due to global climate change. And while countries like the Kuwait they are re-evaluating desalination methods, others like Cyprus design a pipeline towards the Turkey to stock up on fresh water. It therefore seems that the search forblue gold it will also have to go through energy: perhaps it was obvious, but the man, apparently, understood it (too late?).

The Awakeners: the EU campaign against waste ❯