The faster you walk, the less your brain ages. I study 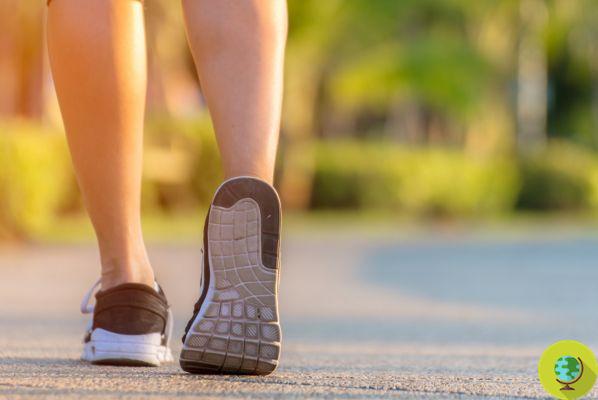 According to a research, the speed of our gait indicates physical and cognitive decline already at 45 and by the age of three we understand who will be slow and who will not.

Walking faster helps the brain stay young. Conversely, a new study shows that la speed of our gait is an indicator of a more or less rapid physical and cognitive decline already at 45 years of age. In short, there could be a link between the well-being of our brain and speed in walking and not only that: the signs of the tendency to age a little more quickly can already be seen in early childhood.


The new retrospective study published on JAMA Network Open and conducted by researchers from Duke University King's College London aimed precisely at verifying the hypothesis that slow speed of gait reflects biological aging, among other things accelerated during middle age, as well as neurocognitive malfunction in childhood and cognitive decline from childhood to middle age.

What does it mean? Which probably walking slowly indicates a little faster aging.

The London researchers analyzed the data collected (tests, analyzes, measurements, resonances and more) from the Dunedin study, a large population study that recruited hundreds of men and women born in 1972-1973 in the city of Dunedin, New Zealand ( 904 men and women collected starting from their early childhood and up to 45 years).

According to the measurements, those who walked at a slow pace were the same who showed the most signs of aging, from the state of the teeth to the immune system.

“The really surprising thing is that this happens in 45-year-olds, not geriatric patients, who are the ones who are usually evaluated this way,” says Line JH Rasmussen, first author of the research. In practice, walking fast or slow would not be indicative of health, but it would already be at 45, when we are still practically young.

In this regard, the study has highlighted that it is also possible to identify who will be a fast walker or who will be slow already from preschool age: the scholars, in fact, evaluating all the information relating to the participants, verified that as early as three years old the slow and the fast scored differently on neurocognitive tests that measure fine motor skills, IQ, language comprehension, ability to cope with frustration, and emotional self-control. And not only that: it seems that the slowest were also those who apparently seemed a little less young than the others.

"Doctors know that slow walkers between the ages of seventy and eighty tend to die earlier than fast walkers," says Terrie E. Moffitt, senior author of the publication. But this study looked at the period from preschool to middle age and found that slow walking is a problematic sign decades before old age. "

The research, in essence, says that already in early childhood, through neurocognitive tests, the signs of the tendency to age a little faster can be detected and that the walking speed of 45-year-olds can be used as an indicator of their brains and bodies. as they age.

The faster you walk the slower you get older, now it's official! ❯

add a comment of The faster you walk, the less your brain ages. I study