The EU parliament bans disposable plastic from 2021: the list of banned products

Disposable plastic, even the European Parliament is in favor of the ban. Yesterday, MEPs voted in favor of a ban on the use of some products from 2021 and approved the elimination of other single-use plastic items

Disposable plastic, even the European Parliament is in favor of the ban. Yesterday, MEPs voted in favor of banning the use of some products from 2021 and approved the elimination of other single-use plastic items.


Even if it is not yet a question of definitive approval, the road traced now seems to be this. The relationship was approved with 571 votes in favor, 53 against and 34 abstentions. To items already placed on the Commission's ban list including disposable tableware, cutlery, cotton buds, straws, drink mixers and balloon sticks, the European Parliament has added oxy-degradable plastic items, such as bags or packaging, and expanded polystyrene fast-food containers.

According to the European Commission, over 80% of marine litter is made up of plastics and banned products are 70% of all marine litter. Due to its slow decomposition, plastic accumulates in seas and beaches, as also demonstrated by the presence of residues in marine species such as sea turtles, seals, whales and birds, but also in fish and crustaceans, and therefore also in the food chain. .

Among those proposed by the Commission and those added by Parliament, here is the list of all the products banned:

Other measures have also been approved such as reduction of consumption of food containers by 25% by 2025 and 50% for cigarette filters containing plastic.

Manufacturers of items such as wrappers, cigarette filters, wet wipes will also be obliged to provide for waste management and cleaning costs, the so-called extended producer responsibility.

“Member States should ensure that tobacco producers bear the costs of waste collection for these products, including the transport, treatment and collection of waste. The same goes for manufacturers of fishing gear containing plastic, which will have to contribute to achieving the recycling target ”.

Here are the top 10 plastic products most frequently found on European beaches: 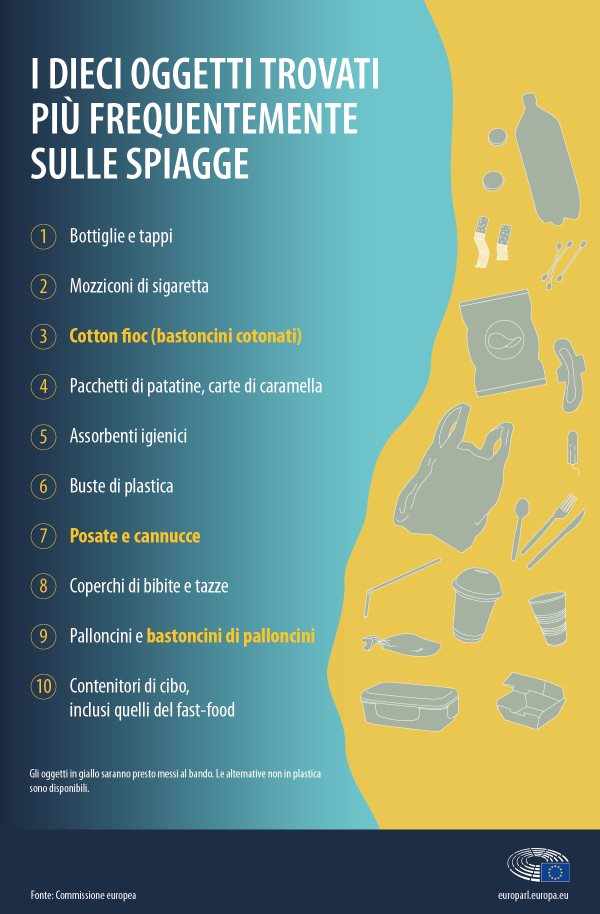 Member States should also ensure that at least 50% of lost or abandoned fishing gear containing plastic is collected each year. The recycling target to be achieved by 2025 must be at least 15%. Fishing gear accounts for 27% of the litter found on European beaches. 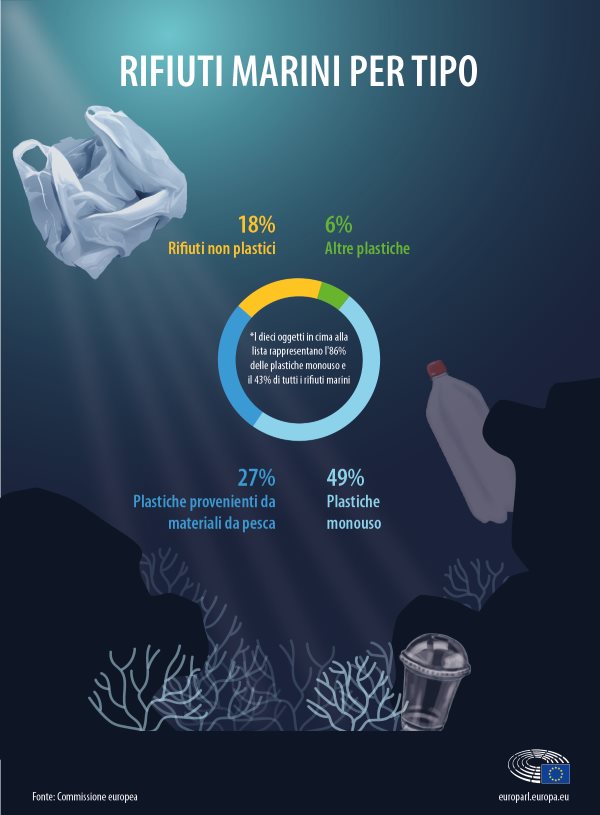 Among the innovations proposed by Europe there is also the goal of achieving the collection of 90% of plastic bottles by 2025 also with the system of returnable empties and the obligation of labeling for sanitary napkins, wet wipes and balloons. , so that users know how to dispose of them correctly, all accompanied by an awareness-raising activity.

As soon as EU ministers have established their common position. negotiations will begin between Parliament and the Council for the final text.

It should be remembered that the fight against marine pollution starts first of all with us consumers, starting with correct separate collection. In fact, waste does not go alone into the sea but it is mainly due to neglect. Through recycling, we can ensure that these environmentally hazardous objects can come back to life.

The hidden danger of "zombie" batteries: thrown in the garbage, they are causing numerous fires in landfills ❯