Stopping the import of some products into the EU due to the high risk of drought in producing countries will increase food insecurity.

According to a study published in Nature Communications, some strategic supplies EU import products (including coffee, chocolate, sugar cane, palm oil and soy) may soon be discontinued due to severe drought, linked to the global climate crisis, which is hitting the main producing countries.


Imports into Europe of Palm oil (used in many foods and household products), according to the researchers of the recent study, would be particularly at risk; same fate for the soy, which is the main feed for chickens and pigs in the European Union.

Scientists predicted a sharp increase in the risk of drought for EU agricultural imports, taken as a whole. Over the past 25 years, only 7% were exposed to this risk, but this figure could significantly increase, reaching 37% over the next 25 years even if carbon emissions were drastically reduced. Decreasing supply could obviously lead to higher product prices.

The analysis considered drought as the only risk factor, but other climatic impacts, such as floods and increased pests, or a drop in labor in the event of severe heat waves or biodiversity loss with fewer pollinators, could worsen. the situation. However, the study speculates that some regions may see a decrease in drought risk in the future, which would at least partially compensate for agricultural crops lost elsewhere.

The lead author of the aforementioned research, Ertug Ercin, founder and director of R2Water Research and Consultancy and Visiting Fellow at Vrije University in Amsterdam (The Netherlands), stressed that we are all interconnected globally through trade. As with disasters (natural, health, etc.) caused by a changing climate, although these phenomena are perceived as geographically remote from our national borders, they heavily affect our lives and have significant consequences for social and economic communities. of the EU.

Imports at risk for the EU

The EU consumes one third of the coffee world and half of this comes from Brazil and from Vietnam, , which are highly vulnerable to drought due to global warming; on the other hand, Colombia and Kenya would seem less vulnerable to drought. Heat waves and rust from wheat leaves, among other things, are also significantly damaging coffee cultivation.

The EU produces about 3% of soya beans it consumes and as many as 60% of soybean imports come from places where a high vulnerability to drought is expected by 2050, if we consider a future scenario with medium emissions. Given that soybeans are essential for feeding European livestock, the EU could suffer the negative consequences of a drastic interruption of soybean production.

Furthermore, the EU is 100% dependent on imports of cacao for its own chocolate production. Increased levels of drought are expected to hit particularly hard Indonesia e Malaysia and, to a lesser extent, the Ivory Coast and Ghana. The study estimated that 28% of cocoa imports will come from locations that will show high vulnerability to drought in 2050. 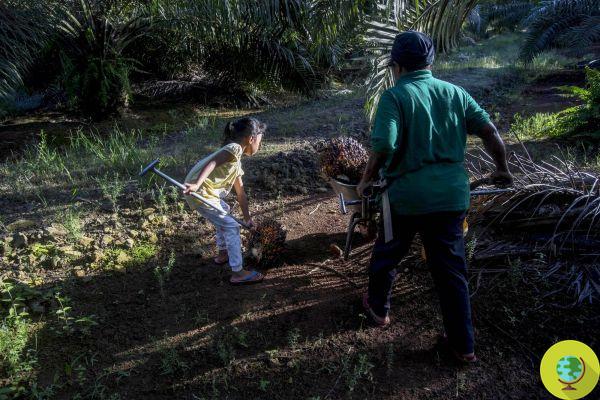 THEPalm oil is one of the most used products in Europe and 61% of these imports will be highly vulnerable to drought, especially those fromIndonesia. The sugar cane it is mostly imported into the EU in the form of processed food and 73% of these imports are at risk. The analysis instead found a low vulnerability to drought for maize and sunflower imports.

Food insecurity on the rise

The data analyzed by the researchers concern the pre-Brexit phase, for which the United Kingdom was included in the study, where the ability of exporting countries to adapt to drought, for example by building more water deposits. However, the study was unable to assess whether and to what extent the increase in exports from countries least affected by drought could actually compensate for the decline in production in other countries.

The world food systems (including the European one) are increasingly precarious in an open, fluid, liberalized and globalized trading system; therefore, they will need to become more flexible to successfully adapt to extreme events related to climate change on a national, regional and global scale.

In summary, food security is called into question in a global economy left at the mercy of an unprecedented climate crisis. Europe is not excluded from the climate crisis; on the contrary, he will feel its harmful effects more and more.

Ercin stated in this regard that:

"It is essential, in the interest of Europe itself, to tackle the climate problem [at the international level]."

In his view, helping poorer nations to reduce emissions and adapt to global warming for humanitarian reasons was an important step. But Ercin hopes that this type of perspective can shake up the European industrial sector and the EU policy makers and decision makers to adopt concrete measures and measures in this regard.

The child slaves who bring chocolate to our tables

The Happiness Curve: Find out at what age you will be happiest ❯