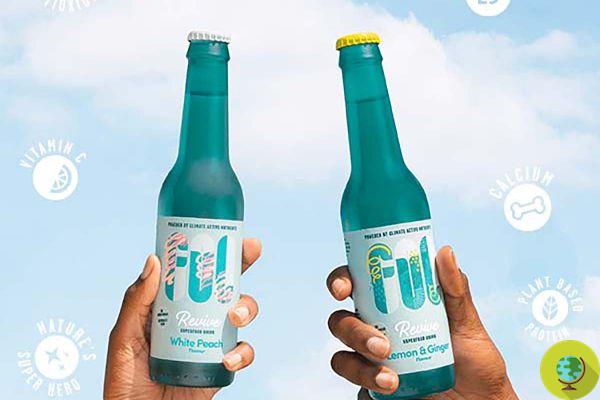 In the Netherlands, Ful was born, a sparkling spirulina-based drink that aims to have a zero environmental impact production

A team of food scientists in the Netherlands have created an original blue drink based on spirulina. In addition to color, its particularity is that it absorbs more carbon than is emitted during the production process.


The soda Ful, this is its name, has a curious blue color that gives it the spirulina with which it is made. This seaweed, thanks to its properties (as well as its color), is increasingly present in food products (we talked about pasta, for example, as well as beer). A choice that enriches food and drinks with different benefits as well as giving it a more captivating aesthetic.

Read also: Spirulina algae: benefits and what happens to the body every day we take it

In the Netherlands there is a lot of experimentation with algae and these, used as materials for 3D printing, have made it possible to make chairs and bottles of shampoo as well as fuel for vehicles and now also a base and flavoring agent for soda.

But Ful is a bet for those who designed it also because it tries to achieve zero emissions and this thanks to the use of the spirulina, whose cultivation consumes, absorbs and metabolizes CO2 to return oxygen.

As we read on the site:

FUL ® actually converts more CO2 (into oxygen! And nutrients!) Than it emits in the manufacturing process. Think of it this way: Producing what we eat and drink typically produces CO2 (in fact, the food industry is among the worst culprits of these greenhouse gas emissions), but the FUL model reverses that concept. Rather than nutrient production serving as a source of CO2 emissions, CO2 becomes a major source for our nutrient production. We call it 'CO2 recycling' because our spirulina is grown using CO2 that would otherwise have been emitted into the atmosphere by other industrial processes such as brewing.

A drink that appears to be decidedly sustainable. But what does it taste like? Those who have tasted it say it is pleasant, slightly salty and that it goes well in general with other flavors.

Ful is currently produced in white peach, lemon ginger and lime and mint flavors. These are the ingredients of the lime and mint version:

The production is entrusted to a Dutch brewery which is a large producer of food CO2, useful for the algae which are then used to make the drink. A closed-circuit production, therefore, always with a view to maximum sustainability and resource saving.

Ful can be ordered in the EU and UK directly from the drink site.

The bike is good for the brain and for the eyes ❯