The benefits of choosing organic foods regardless of nutritional value 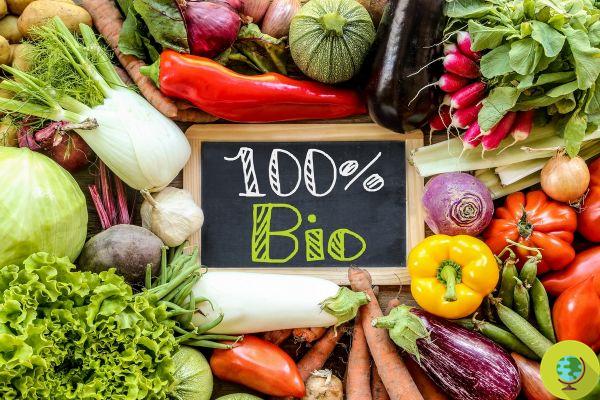 Eating organic, what are the advantages? Why spend more to buy organic products? A few weeks ago a research showed that organic products are not so different from traditional ones from a nutritional point of view, thus giving the media an opportunity to promote organic food halfway, insinuating many doubts about consumers.

Eat biological, what are the benefits? Why spend more to buy organic products? A few weeks ago a research showed that organic products are not so different from traditional ones from a nutritional point of view, thus giving inspiration to the media of half promote organic food , insinuating many doubts about consumers.

But do consumers who choose organic do it really for the greater organoleptic properties of the products? Who buys organic what benefits do you expect?

We talked about it on the occasion of the SANA 2012 with some of the main stakeholders in the sector. And the arguments are definitely compelling.

“In my opinion the fact that the organic product is more or less nutritious it's a false problem - he states firmly Fabrizio Piva, at the head of one of the main certification bodies “As the Chief Executive Officer of the CCPB I can say that organic is no longer nutritious. But this does not detract from organic because organic has values ​​that go beyond the organoleptic ones: it was not designed, built, managed to be more nutritious than the conventional product. But to be healthier; due to the fact that through its production environmental resources are defended; for the fact that it is possible maintain production cycles over time, biodiversity. It is not a speech of greater or lesser nutritional power. In my opinion, the money from this research was thrown away: it was known before that the organic product is the same as the conventional product. A tomato is always a tomato. Whether it comes from organic, traditional seeds or even GMOs, the nutritional power does not change ".

Exactly the same notice too Paolo Pari Marketing Director of Almaverde Bio: "L'biological agriculture it is a production system that offers certain guarantees, it has never said that the product has more nutritional power from an organoleptic point of view. Organic farming says that by applying techniques that are more environmentally friendly you get quality foods ... comparable at least to conventional ones. From my point of view, I would reverse the argument, I would say that they are no less nutritious than traditional products which are also made with many tricks. Therefore in my opinion this is also a research in favor of organic: a product that is made with natural techniques manages to maintain the same nutritional properties, also because it is not that organic can modify the genetics of plants or animals ".

These searches do lose sight of what is the true mission of organic farming which is fully respected: there are no traces of pesticidesDand OGM and there is no possibility of create microorganisms resistant to antibiotics. So everything that organic farming promises is kept. Without considering theenvironmental impact: we know how many herbicides there are in drinking water. I think organic is not really afraid of this type of news and the front page headlines used in the newspapers “.

It also focuses on the prevailing environmental advantage Alessandro Flea, because according to the Technical Director of ICEA “we choose to consume organic essentially to preserve the environment, food biodiversity and give a better future to our children. So, even if there wasn't the immediate advantage of swallowing more nutritious products, there is another even more important one: that of not contributing to the destruction of the world in which we live by introducing it into the catena alimentary of pesticides".

Rossella Bartolozzi, Administrative Manager of Probios we must not forget the aspects related to health and ethics inherent in organic products, especially in the so-called “dry products”, such as pasta, rice, jams, biscuits, creams, pickles etc… which “are first of all cultivated with a certain criterion and do not contain parasites or herbicides. They have no preservatives. They have no glutamate. There are no flavor correctors or substances that cause, for example, that sauce that I buy from a conventional company - without naming names - if I taste it in two years, the flavor is identical. If we take our sauce, with aubergines, for example, and she tastes it again with a different production stock, she will not be able to find the same. There will be a difference, because it is a natural product anyway. I believe the consumer has to make a choice a bit 'head. Perhaps it is not always necessary to choose organic. However, taking an egg from a chicken that has lived its entire existence in a space as large as an A4 paper I think is cruel. I don't do it, but still eat a steak from an animal that has suffered all its life both physically and energetically and has never seen the light of the sun ..is it food? "

In short, as he summarizes well Patrizia Bertoni, Marketing Manager of Baule Volante, citing a bit the philosophy embodied also in the "flying recipe books" distributed by his company: "Buying organic does not just mean choosing for yourself and your loved ones a healthy, good and honest food, obtained without synthetic chemicals, GMO-free, radiation and unnecessary additives. It also means supporting an agriculture that is a source of life, fighting against the plundering of the environment, respecting animals, safeguarding the planet's biodiversity, protecting everyone's health (one's own, that of farmers and also that of those who still do not eat organic). . It is a responsible choice that changes the world “.

All with the same nutritional properties of traditional foods. Organic promoted with full marks, don't you think?

- Organic foods: no nutritional differences with traditional ones

- 10 foods that would be better to choose organic

Vegetarians? They are more optimistic! All thanks to the antioxidants ❯