The beautiful legend of the shower head

The shower head has a deep symbolic meaning connected to desire, to childhood, but also to the idea of ​​detachment, travel, freedom and rebirth. Do you know the wonderful Irish legend related to the dandelion?

The shower head is a perennial flower, typical of temperate climates, which it grows spontaneously practically everywhere: on the roadside, on the edge of cultivated fields, in the meadows, of flat, hilly and mountainous areas, up to an altitude of about 2000 meters. It reproduces so quickly that it invades cultivated land, so much so that, especially in the past, the dandelion was considered a weed to eradicate.


Given its spontaneity and ubiquity, it would seem a flower of little value, instead the shower head has many medicinal properties and a deep symbolic, evocative and multifaceted meaning. He has been credited with magical powers and has inspired more than one legend.

The name shower head derives from the particular characteristic that distinguishes it: after fading, in fact, the seeds gather in a feathery sphere similar to a pompom, ready to disperse at the first breath of wind. Similar to parachutes, they fly in the air attached to small umbrellas.

We all, at least once in our life, have blown this flower, maybe in the hope that our wish would come true.

The dandelion is also called dandelion, or dandelion, due to the serrated and jagged shape of its leaves, or bed pad, for its diuretic properties. It blooms every spring, producing gods beautiful yellow flowers, very resistant and loved by bees, which suck the nectar from which the precious is obtained dandelion honey. 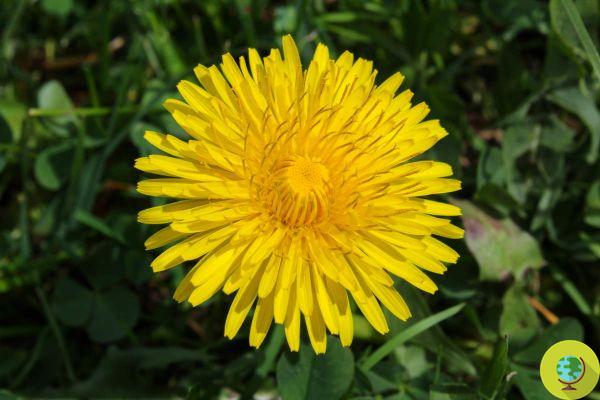 In the language of flowers, the shower head symbolizes the strength, hope and trust.

It is said that Teseo he ate only dandelions for 30 days in a row in order to become strong enough to face and defeat the Minotaur.

In the past, applying the so-called 'theory of signatures', the shower head was believed to have the power to cure jaundice. According to this theory, each plant or fruit reflects in shape or color that part or organ of the human body that it is intended to cure.

Hence, the yellow flowers of the dandelion, by color signature, they were suitable for treating jaundice and liver disorders. Today we know that dandelion is actually useful in curing the liver, even if the reason does not lie in the color of the flowers.

The shower head is linked to the idea of ​​detachment and travel. The seeds of this flower seem to perfectly represent the phases of the life cycle that each of us is destined to complete.

Initially the seeds are related to the pappus, their soft appendix, and it seems they don't want to detach from it. Then slowly they let themselves be carried away by the wind, at first fearful, gradually more and more fearless, ready to embark on a new journey, to experience new adventures.

Having overcome the initial fear, they let themselves go to the flow of life, curious for new discoveries, ready to generate new life.

Their path represents a perfect metaphor for the life of each of us: in order to flourish, each one must detach himself from his own origin, facing their own journey without fear, ready to fight against the elements and to seize every opportunity.

Another meaning of the shower head is represented by thechildhood and innocence.

In fact, it is above all children who blow on this flower, dispersing its seeds. In this case, the symbolism does not have a negative meaning, to indicate something that has been lost forever, but rather a positive connotation linked to the memory of a beautiful past and therefore, to the hope of an equally rosy future.

The shower head represents joy and lightheartedness typical of childhood, which we must recover and rediscover in adulthood.

This flower has also always been linked to prosperity and luck. In the past, it was customary to add a dandelion to the bride's bouquet, in the belief that it would bring wealth and luck to the couple.

The shower head loop also represented the alternation between day and night, sun and moon. Initially, the dandelion is yellow and golden, just like the sun. Later it transforms into a white sphere similar to the moon ball.

Finally, they were attributed to the shower head Magic powers. It was believed that it was able to increase the psychic capacity of people.

It was also believed that rubbing himself on this flower allowed to be accepted and well liked by all. Even the Witches they carried out this practice, rubbing their bodies with a dandelion, in order to be accepted by people.

But above all the shower head was considered a kind of bridge able to put in connection with the spirits of the afterlife.

Due to its beauty and fascinating symbolism, the shower head is one of the most popular and widespread designs among tattoos.

It is often depicted in a particular way: the seeds that detach from the flower turn into birds, to indicate above all freedom, the possibility of a new beginning and the desire to start over.

Birds also represent the rebirth, the ability to start over, getting up after a difficulty and turning negative events into new opportunities. 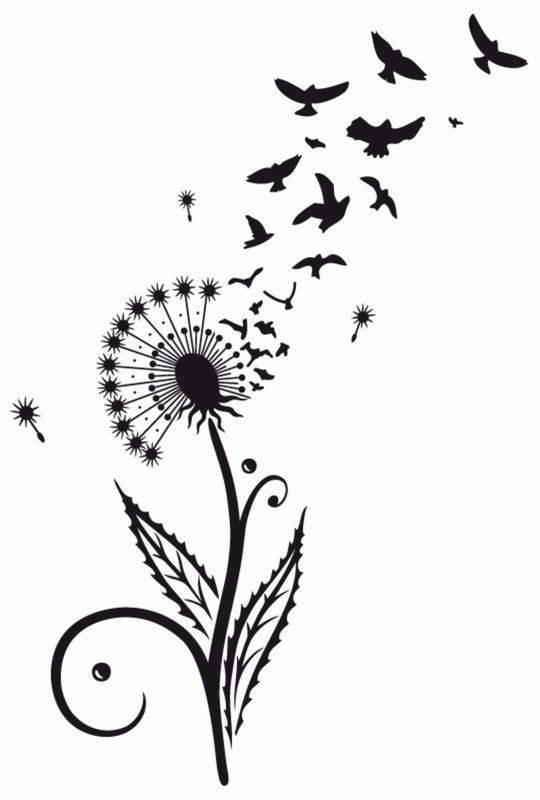 Quotes and verses about the shower head

As mentioned, the shower head embodies overbearing the possibility of rebirth and the idea of ​​change. There is a very explanatory phrase traditionally associated with this flower: "Every breath is a second chance".

The dandelion is mentioned by poets and writers, and each time each emphasizes a particular aspect.

In her book "The Flower Fairies - The Book of Girls", for example, the writer Cicely Mary Barker emphasized lthe beauty and strength of this flower:

"Look at my jagged leaves,
blow the hands of the shower head
look at my waves among the hedges,
look at the meadow, the path,
keep me in the garden, allegro e fiero!
Pick me up: I still grow,
without asking permission or apologizing,
what do you do with your hoes then?
You will never be able to uproot!
Nobody can impress me,
because I am the Dandelion! "

Also Emily Dickinson, an extraordinary American poet of the second half of the nineteenth century, has dedicated some verses to the shower head. In a poem she emphasized its positive meaning of rebirth, of spring triumphing over winter:

“The pale stem of the Dandelion
the Grass amazes and Winter suddenly becomes
an infinite Alas
on the stem rises an unusual Gem and then a noisy Flower
the Proclamation of the Suns
that the burial is over. "

In another, however, all the pessimism and melancholy temperament of the poet emerged. In this other poem the life of the shower head is captured in his transience and drama, just as human life is fleeting and tragic:

“The little Ethereal Hood
Resting on the Head -
flexible dressmaking
Of a wise God -
Until it slips away
One nothing at a time -
And the Drama of the Soffione
It dies out in a stem. "

Even the poet Walt Whitman he dedicated some verses to the shower head, in his poem 'The First Dandelion', to underline the beauty, the joy and the imperturbability of this flower.

"Simple, fresh, gentle emerging at the end of winter,
almost never had there been artifices of fashion, business, politics,
from the sunny corner, nestled in the grass - golden, innocent, like the quiet dawn,
the dandelion, the first of this spring, shows us its confident face. "

The shower head and desire

The shower head has always been deeply connected to the idea of wish.

It is said that by blowing vigorously on the pappus of the flower, if you manage to disperse all the seeds in one fell swoop, the desire expressed will come true.. Lovers were and are used to entrust this flower with the fulfillment of all their love dreams.

According to another custom, the shower head was used as a real one oracle, to which the temporal determination of the occurrence of a specific event is left.

The showerhead wondered how many days, months or years it would take for a certain wish to be fulfilled. Then it blew.

The number of puffs necessary to disperse all the seeds would have given us the answer of how many days, months or years would have separated us from the desired event.

According to a Irish legend, the corolla of the head is the home of the fairies, once they were free to roam in the meadows. When the earth was inhabited only by gnomes, elves and fairies, these creatures lived freely in nature.

The arrival of man forced them to take refuge in the woods. But the fairies wore clothes that were too bright to blend in with their surroundings. For this reason, they were forced to turn into dandelions, while maintaining their pride.

Even if trampled by man, in fact, the shower head always returns to an upright position.

To know more about dandelion, you can also read:

The word dandelion derives from the union of two Greek words (taraké, which means agitation, confusion, upset) and akos (remedy).

It is particularly indicated in the liver care and in the treatment of skin diseases. Among his medicin propertieswings, we recall the main ones:

The super easy-to-make drink that makes you lose weight faster, according to studies (and it's not green tea) ❯

add a comment of The beautiful legend of the shower head