The appalling condition of the McDonald's ice cream machine 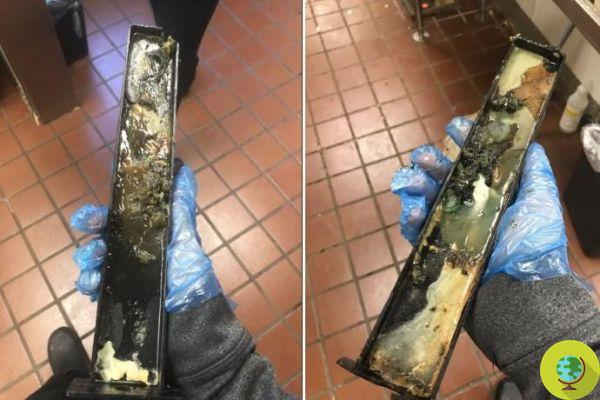 A terrible indefinite slime and full of mold. This is what you can find in McDonald's ice cream machines

A terrible indefinite slime and full of mold. This is what you can find in McDonald's ice cream machines.


A former employee of the Laplace, Louisiana fast food chain posted them online, showing the chilling condition of the machinery.

The boy had posted the scandalous images on Twitter, along with many other worrying scenarios in the "behind the scenes" of the fast food restaurant where he worked. Now those terrible photos showing that mud-like liquid have started spinning again on the web. This had even cost him his job.

According to Nick, no one, during the period in which he worked at the Mc, had cleaned those cars:

“This came out of the McDonald's ice cream machine in case everyone was wondering,” reads the post below.

This came out of McDonald’s ice cream machine in case y’all were wondering… pic.twitter.com/DTXXpzE7Ce

For its part, McDonald's promptly issued a statement:

“We are committed to running fine restaurants that provide our customers with high quality food, service and a clean environment. This is a part of our soft-service equipment that does not come into contact with any food and must undergo regular and timely cleaning. "

Typically, drip trays should be cleaned by restaurant managers. However, Nick insisted that he has never seen anyone do it.

The former employee of the MC also said that he had witnessed other violations of the health code.

“Sometimes my colleagues threw the food out and then put it back on the sandwich. I've seen this happen multiple times, ”Nick said. The young man also tweeted photos of the food before and after cooking.

shit so nasty and old it’s tearing the plastic up lmao pic.twitter.com/BSrYf3jfUW

Since I’m exposing McDonald’s I might as well show y’all what y’all really eating… fresh out the freezer. pic.twitter.com/KZ7Ao1kWsR

According to a Dateline survey of the country's most popular fast food restaurants, “The 100 McDonald's we examined came to a total of 136 critical violations. Some did not have a trained and certified food operator on the job, which is required by law in many states. "

Not to mention the touchscreens. One I study English, conducted recently, revealed that in the screens present in Mc Donald's there are even bacteria and stool residues.

No need to add anything else ...