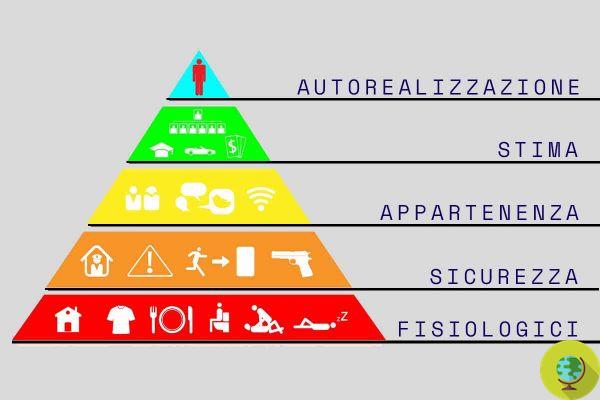 The famous Maslow Pyramid identifies the 5 basic needs of every human being. But are they really these?

Have you ever heard of the Maslow's pyramid? Designed by psychologist Abraham Maslow, it is a visual representation of hierarchy of human needs, divided into 5 levels. Starting from the basic level, where we find the essential physical needs, up to the final level corresponding to self-realization.


According to Maslow, the lower levels of the pyramid need to be satisfied before the higher levels. In his opinion, when man satisfies physiological needs, others immediately emerge and when these, in turn, are satisfied, new ones emerge and so on.

Growth needs that are found at higher levels would depend on the desire to grow as a person. And once satisfied, it would be possible to reach the highest level called self-realization. Progress which, however, in real life, is often interrupted by the inability to meet the needs of the lower levels. Perhaps due to losses and various problems, which can cause fluctuations from one level to another, explains Simply Psychology.

Its pyramid is very famous and appreciated, but also much criticized both for some of the methodologies he uses, and because, in the opinion of many, it is by no means certain that a person must satisfy the lower needs before he can reach his own potential or other levels of the hierarchy. Furthermore, Pamela Rutled, in an interesting article published in Psychology Today, states that needs are closely anchored to the human capacity to establish social connections and that - belonging is the driving force of human behavior, not a third level activity -.

Here are the 5 levels of the Maslow Pyramid and their respective needs:

The different levels, however, are not so static but constantly changing, Maslow himself admitted, based on external circumstances and individual differences. His pyramid was then enriched with further levels, corresponding to aesthetic, cognitive and transcendent needs.

The characteristics and behaviors of self-realized people

According to reports SimplyPsychology, Maslow allegedly identified typical behaviors e the main characteristics of self-realized persons, which, however, are the subject of many criticisms. Then we'll find out why.

As regards the behaviors that lead to self-realization, Maslow identifies the following:

And here is the list of characteristics of self-realized persons, which in his opinion do not necessarily have to possess them all but at least in part:

Although Maslow's pyramid is highly appreciated, there is no shortage of criticism, especially on some of the methodologies used by him. To identify the characteristics of self-realized individuals, for example, he would have resorted to the so-called biographical analysis, which is not very objective and concentrated, among other things, on a limited sample of people, with a clear prevalence of highly educated white men and a small number of women. So a absolutely not representative of reality.

Not to mention that according to several authors, it is by no means certain that a person must satisfy the lower needs before he can reach his potential or other levels of the hierarchy. Many people living in poverty, regardless of whether their physiological needs are not fully met, have needs from higher levels. And what about the many artists who, despite very precarious living conditions, seem to have fully achieved self-realization?

Also criticizing Maslow's model is Pamela B. Rutledge in an article published in Psychology Today. Pamela states that - none of these needs, from basic survival onwards, is possible without social connection and collaboration. - So - connection is a prerequisite for survival -, physical and emotional. It goes without saying that needs, unlike what Maslow claims, are not hierarchical but an - interactive and dynamic system - anchored to our ability to establish social connections. According to Pamela belonging is the driving force of human behavior, not a third level activity.