The 15 foods that quench desire 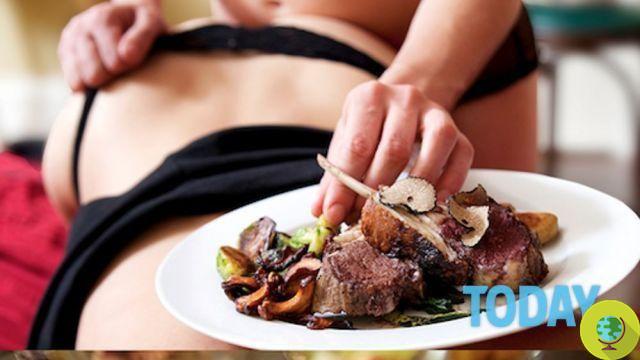 Let's not turn around: the way of sex passes through the table. From the famous aphrodisiac foods, but also paying attention to those capable of extinguishing the desire.

Let's not turn around: the way of sex also passes through the table through the famous aphrodisiac foods, but also paying attention to those capable of extinguishing desire. Even the ideal couple, the one with so much healthy passion and complicity, he risks, at the table. But how?


And how to keep the passion alive? Prepare, at least from time to time, delicious dishes to be enjoyed in a tête-à-tête, get to know the Decalogue of the perfect aphrodisiac food, to the sound of garlic (and yes!), almonds & Co, but also equip yourself so that the so-called anti-aphrodisiac foods.

Curious to know what they are the foods that extinguish the passion? Come on, the nutritionist thought about introducing them to us Elouise Bauskis, which offers a series of foods to avoid if we want a happy ending under the sheets.

Black licorice - Well yes, despite its many property, licorice is said to be able to reduce testosterone levels in men and women, a hormone related to sexual desire

Formaggio - Slow to digest, it also gives an unpleasant feeling of heaviness. Not quite the top ...

beans - Flatulence in the first place, do you know what it looks like?

Chocolate - Ni: in the sense that only that is good dark with a minimum of 70% cocoa, to exploit the levels of antioxidants and L-tryptophan (precursor of serotonin). In this case, chocolate relaxes us and improves mood

Hot dog - Not only sausage, but also similar sausages should be avoided because they can clog the arteries, resulting in a lower blood flow. Goodbye erection!

Peppermint - Burps to go go if you chew gum or candy that contains the peppermint. You know what a show ...

Tonic water - Not everyone knows that quinine is found inside as an aroma, an antimalarial remedy which, however, can reduce sexual functions

Chips - They give energy immediately, but after a while they leave a feeling of tiredness: in addition, if cooked in poor quality oils they can induce heaviness and digestive difficulties

Red meat - Food at risk depending on the case, in some subjects it provides iron and other energizing substances, while for others it is difficult to digest and becomes heavy

READ ALSO: 10 reasons to at least eliminate red meat from your diet

Tofu - Alas, if you are a convinced vegan, stay away from tofu at least for one evening: it contains, in fact, phytoestrogens which, if in abundant quantities, reduce testosterone levels

Canned foods - They are not good for anything, not even sexual functions

Red wine - A little bit of Red wine it takes. But just a drop, before the counterproductive effect of the dilation of the vessels occurs

Broccoli - Broccoli all your life, of course! but far away if you want some intimacy tonight. Meteorism and flatulence lurking if you eat them before a romantic date.

The 3 evolutionary stages of consciousness ❯

add a comment of The 15 foods that quench desire