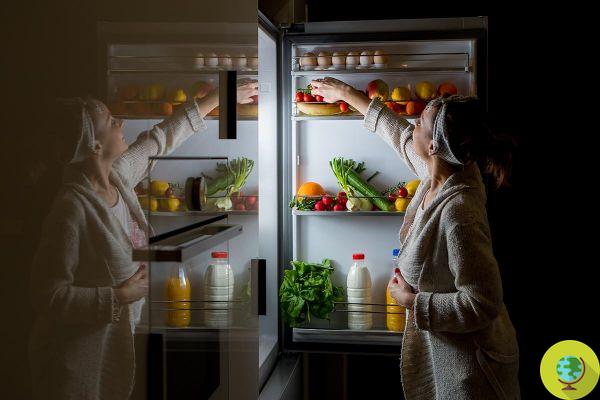 Dining late is not a good habit: it weighs down, does not promote digestion (especially if we go to sleep after a while) and makes you fat

Do not store avocado like this: it is dangerous Those who usually dine late at night, and maybe go to sleep shortly after, should know that it is not a healthy habit. He explains why "our" nutritionist. There is a saying that reads "breakfast like a king, lunch like a prince and dinner like a poor man", with this obviously we mean that while breakfast is the fundamental meal to which we should devote the right time, eating well and enough, as we proceed during the day, instead, we should "lighten" our meals. Usually, however, we tend to do the exact opposite, a little perhaps in a hurry, a little because we have acquired unregulated habits that are now difficult to change. A mistake we often make is having a late dinner with several disadvantages for our health and fitness. The most obvious, especially if we do not allow enough time to pass before going to sleep, is that of feeling heavy and not promoting digestion, much less a restful sleep. But that is not all. We asked the nutritionist  Flavio Pettirossi what is the biggest drawback of dining too late in the evening. Here is what he told us: Often during a typical day of ours, we tend to skip a meal or eat little during the day, thus ending up becoming the main meal and perhaps sitting at the table very late. The later it gets in the evening, the harder it is for the body to dispose of the calories we are assimilating, with the result that it is unable to consume a lot of energy and therefore transforms excess calories into fat. What if we just can't help but eat late, perhaps for work reasons? For those who eat late, the ideal is to have a dinner that takes into account above all the daily protein requirement, rather than foods rich in carbohydrates that are difficult to dispose of a few hours after sleep at night (remember that it is important to wait at least two hours after dinner before going to bed) . So a little pasta or bread, but a lot of cooked or raw vegetables and a second course based on fish or lean cold cuts, can be good examples. Doctor Pettirossi had also explained to us why it would be good not to have breakfast too late in the morning. Also Read: Here's Why You Should Never Have Breakfast Too Late According To The Nutritionist Also Read:
That's why you should never make important decisions on an empty stomach ❯