Tempeh: What exactly is it and how to cook these nutritious vegetable proteins like steak

Tempeh is a food native to the island of Java, Indonesia, which is obtained from bean sprouts. Let's find out what it is and how to cook it 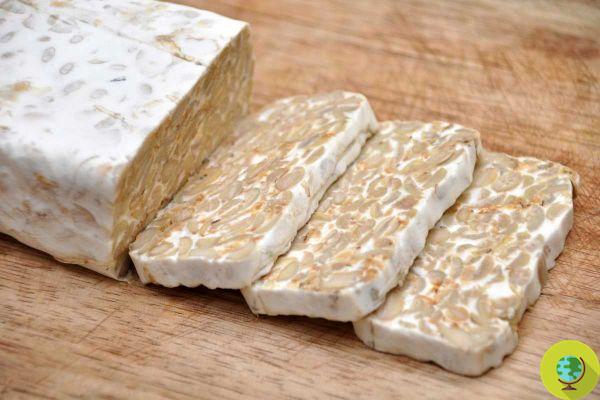 Tempeh is a food native to the island of Java, Indonesia, which is obtained from bean sprouts. Let's find out what it is and how to cook it

Il Tempeh also called soy meat it is a food native to Indonesia, and very common in other Southeast Asian countries. An excellent source of vegetable protein, tempeh is a staple of vegan and vegetarian cuisine.

The main ingredient of this product are i bean sprouts, which are first softened in water and then cooked and left to ferment. (Read also: How to make tempeh at home)

Tempeh: what it is and origins

Tempeh is a traditional Indonesian product based on fermented soybeans. It has a firm texture and an earthy flavor, which becomes more pronounced with aging, somewhat like cheese. As the tofu, tempeh is made from soybeans, but unlike tofu it is a whole soy product; this gives it different nutritional characteristics and structural qualities, for example, it contains more protein, fibers and nutrients than tofu.

Tempeh is native to the Indonesian island of Java, unlike most soy-based foods, which are primarily native to China, Japan or Korea. The exact origins of tempeh are less clear than those of other soy-based foods, but are thought to have been around for at least several hundred years, although the earliest known reference dates back to 1875. It may have been accidentally produced as a byproduct of tofu production, when discarded soybeans interacted with fungal spores. The first commercial production of tempeh in the United States by Indonesian immigrants began in 1961.

Tempeh has an exceptional nutritional profile. It's a'excellent source of fiber, essential for the well-being of the intestine, and proteins; it also contains a good percentage of carbohydrates, which thanks to the fermentation process are much more digestible.

Great to consume in case of diabetes, because it has a low glycemic index and controls blood sugar levels, tempeh unlike other soy products such as miso, has a low sodium content. This makes it ideal to be consumed on a low-salt diet, but also for those with hypertension problems. That's not all, because tempeh contains beneficial bacteria for our body, mineral salts, such as phosphorus, potassium and calcium, essential for bone health, and Vitamin B12.

(Read also: Vegan alternatives to meat improve the intestinal microbiota even if they are ultra-processed)

How it is produced

Tempeh is produced through a controlled fermentation process which binds soybeans, sometimes with whole grains, in a compact form. Tempeh starter cultures typically include multiple species of Rhizopus mushrooms e R. oligosporus, the latter are predominant since they grow effectively at the warm temperatures typical of Indonesia, and are able to inhibit and compete with other molds and pathogenic bacteria.

Controlled fermentation is about cultivating certain microbes for their health benefits, or how they turn ingredients into something nutritious and healthy, preventing the growth of "bad" microbes.

What characterizes tempeh is the same process that we find in different fermented foods such as aged cheese, yogurt, Kombucha, kimchi, artisanal sourdough, wine or beer. (Also Read: Probiotics: 10 Fermented Foods That Help Your Gut, Metabolism, and Immune System)

After fermentation, the mycelia or the filiform vegetative portions of R. oligosporus multiply, becoming dense enough to compress the soybeans into the characteristic compact and firm shape. Good quality tempeh will have a white coating from the mycelium, as well as dark spots formed by fungal spores. The more spores are produced, the stronger the aroma and flavor. Once the soybeans are bound together, the mushroom releases enzymes that digest proteins, which help create a pleasant texture, flavor and aroma.

Since its protein content is similar to that of meat, tempeh is often used as a substitute; in Indonesia, it is often cut into thin strips and fried, or diced and mixed in coconut milk curry, or barbecued in sweet sauces. It is also common to marinate tempeh in a sweet and sour sauce before cooking. Tempeh can be sliced, diced, or crumbled and incorporated into stir-fries, salads, chillies, or pasta sauces. You can skewer cubes of tempeh with vegetables and grill them as skewers, or slice and fry them in a pan and then fill delicious sandwiches.

This is one prescription simple and tasty, to be served with salads or cereals, or more simply with vegetables.

Land of fires: too many cancers, deaths and hospitalizations among children ❯

add a comment of Tempeh: What exactly is it and how to cook these nutritious vegetable proteins like steak