Tattoos: how to recognize allergies and infections (avoiding complications) 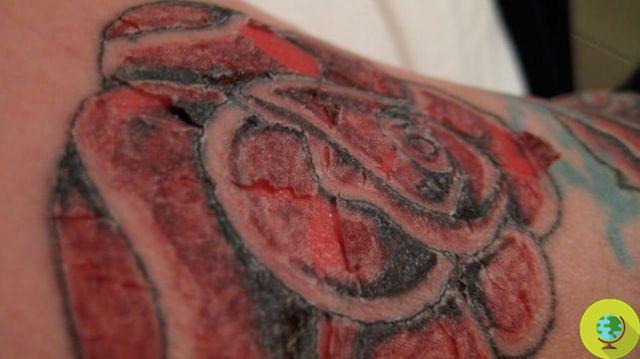 Many people have complications after having their skin tattooed. How to avoid them and how to avoid an infection.

Tattoos and allergies: more people than you think he has complications after having her skin tattooed. Complications that often become chronic and last over four months. Pain, thickening of the skin, granulomas, allergic reactions, infections and pus: many do not know the contraindications of a tattoo, which is often done a little too lightly.


According to a study by Langone University in New York published in the journal Contact Dermatitis, 10% of those who get a tattoo develop complications or adverse reactions, which in more than half of cases become chronic. Health problems range from simple redness to more or less dangerous allergic reactions that even require the removal of the tattoo itself.

READ also: TATTOOS AND PIERCING: IF DONE LAUGHLY, THEY CAN CAUSE EVEN SERIOUS INFECTIONS

The research looked at 300 randomly chosen people and asked if they had ever had any problems with their tattoos. About 10% of the sample said they had some complications and among them six out of ten reported problems that lasted more than four months.

"Often the problem is a bacterial infection, but in some cases what we found was definitely an ink allergy - explains Marie Leger, co-author of the study - people who got a red tattoo without problems, then after a few years they did another one and all of a sudden they both started itching and swelling. "

READ ALSO: ARE YOU SURE OF YOUR TATTOO? THE INK USED NOT A LOT

How to tell if a tattoo is infected

Irritation and a little bit of redness, but also a slight burning o pain on the tattooed area are the so-called side effects which normally appear in the hours following the tattoo. Only if these signs worsen over the next 48 hours is it likely that there is an ongoinginfection. The fever it is the first sign, but they can also be there secretions of pus yellowish or greenish. The wound also tends to generate bad odors. At this point, it is always good to consult a doctor.

The infections that can develop are:

But serious bloodstream infections can also occur, such as:

The two most common hypersensitivity reactions are allergic contact dermatitis e photoallergic dermatitis. The reaction usually appears as a 'inflamed red rash and it can be scaly at times. Red tattoo pigments cause the most reactions, especially those based on mercury sulfide (cinnabar).

How to avoid complications

The fundamental rule is to always and only contact tattoo artists in possession of thesanitary suitability: Needles must be new, sterile and disposable. Attention also to the inks that must be sterile and non-toxic. According to the Istituto Superiore di Sanità, moreover, in order to get a tattoo you must not choose anatomical parts in which there are nerves or in which scarring is particularly difficult and you must make sure that the area of ​​the skin on which you want to get a tattoo is intact, healthy and disinfected.

Tax on meat: necessary to help the environment and health, according to scientists ❯

add a comment of Tattoos: how to recognize allergies and infections (avoiding complications)