Taste and food choices? They depend on our genes 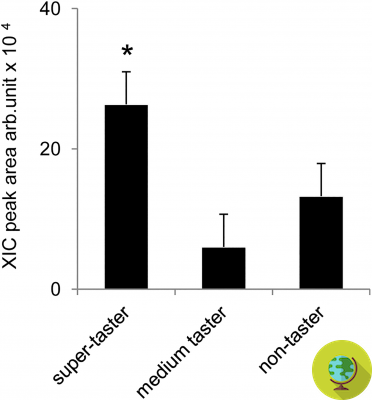 Why do we like certain foods and avoid others? It's a question of genetics. This was revealed by a study by Iole Tomassini Barbarossa, associate professor of Physiology, published in the international scientific journal Plos One


Why do we like certain foods and avoid others? It's a question of genetics. This was revealed by a study by Iole Tomassini Barbarossa, associate professor of Physiology, published in the international scientific journal Plos One.

In two recent works, also published in the journal Plos One, the professor had already shown that some salivary proteins, interacting with food chemicals, can favor the gustatory perception and that this facilitating action depends on specific amino acids present in the sequence of these proteins.

In his latest publication, resulting from the collaboration with the Department of Food Science of Rutgers University (USA), it is shown that these salivary proteins and, in particular the amino acid Arginine, are able to increase taste perception in relation to their concentration in saliva. And that their supplementation can increase taste perception in a dose dependent manner, especially in people who are physiologically lacking.

“An interesting aspect of how the physiology of the sense of taste can influence food choices of each individual and how we can intervene on the taste of a food are the topics of our research. Each individual - explains Iole Tomassini Barbarossa - is genetically predisposed to choose certain foods and avoid others ”.

The researcher was also able to show that these molecules in saliva they perform the function of "carriers": by binding to the chemical substances of food they are able to convey them to the receptor sites of the taste cells, thus favoring their perception.

"The supplementation of simple molecules, such as Arginine, could be - concludes the professor at the University of Cagliari - a strategy to selectively modify the gustatory responses and could open the frontiers in modern" Food sciences "for the creation of foods that, by combining the hedonistic values ​​with the dietetic ones, are destined to patients often forced to punitive and tasteless menus. For them, and not only, a new world of tastes yet to be discovered ".

DISCOVERING THE GENES OF TASTE: WILL THERE BE GENETIC DIETS IN THE FUTURE?

Guttalax, maxi call: the withdrawal of 11 lots for adults and children has been ordered ❯

add a comment of Taste and food choices? They depend on our genes