The tahini sauce is rich in minerals, proteins and fibers, which guarantee the health of the organism. Discover its benefits and how to use it in the kitchen.

The tahini sauce is rich in minerals, proteins and fibers, which guarantee the health of the organism. Find out its benefits and how to use it in the kitchen

La tahini sauce (also called thaina or thain) is a common ingredient in many traditional recipes around the world, including hummus, halva e baba ghanoush.


Its texture is soft and the taste rich, characteristics that make it perfect to use as a simple sauce, spread, or as a dressing for tasty salads. (Read also: Tahini sauce, how to make oriental sesame seed cream

It also boasts a long list of nutrients and numerous health benefits, which is why it's a must-have in the kitchen.

Tahini - or tahina or thaini - is a paste made from Sesame seeds roasted and ground. Considered a staple of Mediterranean cuisine, it is also often present in traditional Asian, Middle Eastern and African dishes.

This is an incredibly versatile ingredient that can be served in a variety of ways. It generally has a soft consistency, reminiscent of that of peanut butter, but a stronger, tastier taste that is often described as bitter.

In addition to providing a large amount of nutrients, tahini has numerous benefits, for example improves heart health, reduces inflammation and also has anticancer effects. (Read also: Hemp seeds: properties, uses and where to find them)

La tahini sauce it is relatively low in calories but rich in fiber, protein and important vitamins and minerals.

According to what reported on USDA one tablespoon (15 grams) of tahini contains the following nutrients:

It has been shown to be one source of copper, a mineral essential for iron absorption, to prevent blood clots and regulate blood pressure.

It is also rich in selenium, a mineral that helps reduce inflammation and promotes immune health, as does the phosphorus, which is involved in maintaining bone health.

Tahini has so many benefits proven by science. Here are the main ones.

The tahini sauce is rich in healthy fats, vitamins and minerals. In fact, just 1 tablespoon (15 grams) provides more than 10% of the daily value of some nutrients.

A search has shown it to be a great source of phosphorus and manganese, both of which play a vital role in bone health. It is also rich in Thiamin (vitamin B1) e Vitamin B6, important for energy production.

Also, about 50% of the fat in tahini comes from monounsaturated fatty acids. These have anti-inflammatory properties and have been linked to a reduced risk of chronic disease. (Read also: Chia seeds: properties, uses and where to find them)

Rich in antioxidants called lignans, which help prevent free radical damage, and can reduce the risk of disease.

Uno study has shown that free radicals are unstable compounds, and when present in high levels they can damage tissues and contribute to the development of diseases, such as 2 type diabetes, heart disease and some cancers.

It can reduce the risk of some diseases

Consuming sesame seeds can reduce the risk of type 2 diabetes and heart disease. They have also been shown to reduce risk factors for heart disease, including high cholesterol and triglyceride levels.

Uno study out of 50 people with knee osteoarthritis found that those who consumed 3 tablespoons (40 grams) of sesame seeds per day had significantly reduced cholesterol levels, compared to a placebo group.

Another 6-week study in 41 people with 2 type diabetes found that those who replaced part of their breakfast with 2 tablespoons (28 grams) of tahini had significantly lower triglyceride levels. Furthermore, the diets rich in monounsaturated fats have been linked to a reduced risk of developing type 2 diabetes.

It may have antibacterial properties

Tahini and sesame seeds can have antibacterial properties, thanks to the powerful antioxidants they contain.

In fact, in some countries of Central Europe and the Middle East, sesame oil is used as a home remedy for foot injuries associated with diabetes.

In one study on the antibacterial capacity of sesame seed extract, the researchers found that it was effective against 77% of the drug-resistant bacterial samples tested. Additionally, a rat study found that sesame oil helps heal wounds; the researchers attributed this to fats and oils oil antioxidants.

Some compounds in tahini are highly antiinflammatory. Although short-term inflammation is a healthy and normal response to injury, thechronic inflammation can harm your health.

Animal studies have found that sesamine and others antioxidants some sesame seeds they can relieve inflammation and pain related to injuries, lung disease, and rheumatoid arthritis.

La sesamin It has also been studied in animals as a potential treatment for asthma, a condition characterized by inflammation of the airways. Obviously, more research is needed to fully understand how sesame seeds affect inflammation in humans.

It can strengthen the central nervous system

Tahini contains compounds that can improve brain health, and reduce the risk of developing neurodegenerative diseases such as dementia.

In studies in a test tube, sesame seed components have been shown to protect the human brain and nerve cells from free radical damage.

The antioxidants of the Sesame seeds they can cross the blood-brain barrier, which means they can leave the bloodstream and directly affect the brain and central nervous system. One study on animals suggests that antioxidants in sesame may also help prevent the formation of beta amyloid plaques in the brain, which is characteristic of Alzheimer's disease.

Furthermore, a further study in rats found that antioxidants in sesame seeds mitigate the damaging effects of aluminum toxicity in the brain; however, more research in humans is needed before any conclusions can be drawn.

It can have anticancer effects

Sesame seeds are also being researched for theirs potential anticancer effects.

Some studies test tubes have shown that antioxidants in sesame seeds promote the death of colon, lung, liver and breast cancer cells.

La sesamina e sesamolo, the two main antioxidants in sesame seeds, have been extensively studied for their anticancer potential. A study has shown that both can promote cancer cell death and slow the growth rate of the tumor. Additionally, they are thought to protect the body from free radical damage, which can reduce the risk of cancer.

Tahini contains compounds that can help protect the liver and kidneys; according to research these organs are responsible for removing toxins and waste from the body.

A study of 46 people with type 2 diabetes found that those who consumed sesame oil for 90 days improved kidney and liver function. Also, another one study in a test tube observed that sesame seed extract protects rat liver cells from a toxic metal called vanadium.

A rodent study found that consuming sesame seeds can improve liver function. In addition, it increased fat burning and decreased fat production in the liver, thus potentially reducing the risk of developing disease. Although tahini provides some of these beneficial compounds, it contains lesser amounts of them than those found in the sesame seed extracts and oils used in these studies.

Easy to add to the diet

Tahini is easy to add inside one balanced diet. You can buy it online or in most grocery stores.

It can be mixed with olive oil, lemon juice, Dijon mustard and spices to create a rich and creamy homemade salad dressing. It is known as stepping into dell'hummus, but it is also an excellent spread or sauce to add to bread, meat and vegetables.

You can also add it as a topping in baked goods, such as banana bread, cookies, or homemade cakes, to tone down their sweetness and add a nutty flavor.

How to make tahini: the recipe

Making tahini at home is simple. 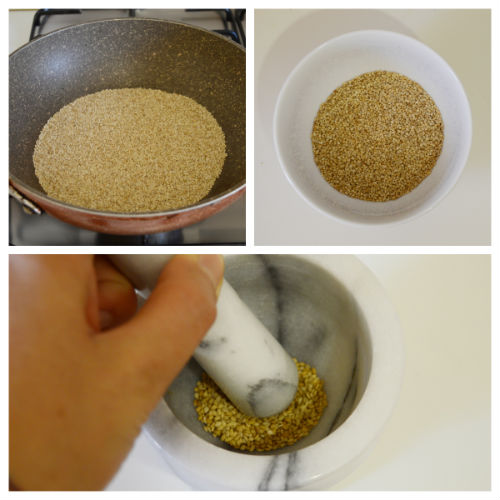 How long can it be kept? Can be stored in the refrigerator up to a month. The natural oils contained in it can separate, so the advice is to mix everything well before use.

Despite the many associated benefits, there are a few negatives to consider.

Therefore, it is important to keep your omega-6 food intake in moderation, e complete the diet with many foods rich in omega-3 fatty acids, like fish. (Read also: Not just fish: 5 sources of omega 3)

Some people might be allergic with sesame seedswhich can cause serious side effects such as anaphylaxis, an allergic reaction that can impair breathing; therefore, if you suspect that you have an allergy to sesame seeds, it is important to avoid eating tahini sauce.

Soy sauce: how to make it at home ❯

add a comment of Tahini sauce: what it is, how to prepare it and all the benefits you don't expect