Systemic lupus erythematosus: what it is, symptoms and treatment

Systemic lupus erythematosus, commonly known as Lupus, is an autoimmune disorder that can affect different parts of the body with very serious consequences. A disease that is difficult to diagnose and for which there is no cure but only treatments aimed at blocking its advance by alleviating the symptoms.

It is essentially a chronic disease in which the immune system is impaired and instead of protecting the body from external microorganisms it attacks it by producing antibodies against its own cells. This situation obviously creates a severe inflammation and localized damage to organs and tissues.

The Lupus it affects women more frequently and it can appear at all ages even if generally by the age of 40 it has already been diagnosed for some time (mainly in women of childbearing age).

Le causes of this disease remain to this day unknown, however, it is believed that it is an inflammatory pathology due to various factors: genetic, environmental, hormonal but also to be attributed to viral infections, exaggerated exposure to UV rays and prolonged consumption of some drugs.

The symptoms of Lupus are varied and must obviously be interpreted and evaluated with the help of a doctor. It generally appears high fever (but it can also be low or just a slight alteration), the affected person then feels tired and weak e tends to lose weight in some cases even going so far as to suffer from anorexia.

They are then warned generalized pains especially in the joints (especially of hands and knees) but also to muscles and bones, depending on the systems most affected by the disease.

Then there are dermatological symptoms: a very characteristic erythema appears which is found in particular on the cheeks and passes through the nose area (it is defined for its "butterfly" shape). You can then attend the hair loss and dander, seeing small sores appear in the mouth but also in the nose as well as red spots and peeling on the skin. 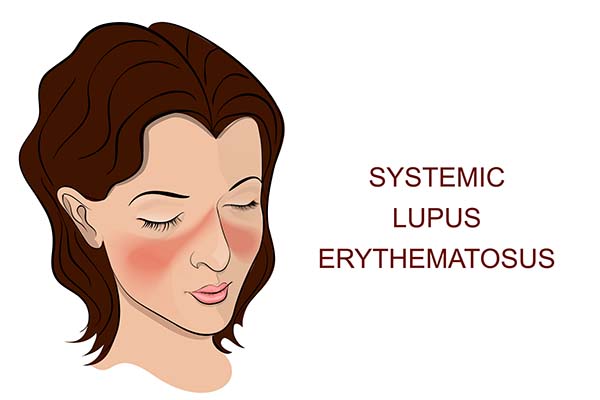 The lymph nodes are enlarged in most patients with lupus and in rare cases there is also an increase in the volume of the liver or spleen.

Other consequences of Lupus are highlighted on the central or peripheral nervous system. In some cases they appear seizures, loss of sensation in some areas, dizziness, difficulty moving. There is also often a hypersensitivity in particular to light.

They can appear later kidney problems (up to a real renal failure) as well as pleurisy, pericarditis, blood clots, blood leaking from the mouth, nose or urine.

Symptoms vary from person to person and this is why lupus is also called the "disease of a thousand faces". 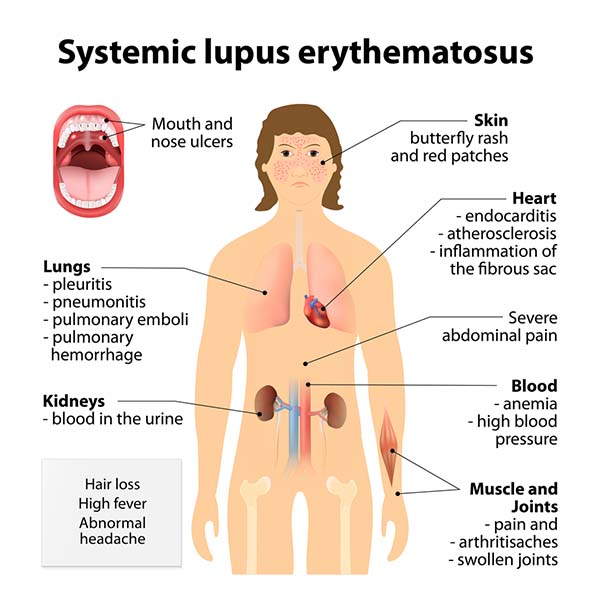 Once the presence of systemic lupus erythematosus has been identified, which is not always easy because it is necessary to cross-reference the results of specific blood tests and other diagnostic tests, the disease is treated. Unfortunately there is no real cure given that it is a chronic disease of which, however, it is possible block the advance also limiting some symptoms.

Generally, i FANS, non-steroidal anti-inflammatory drugs, cortisone and other medicines which are evaluated on a case-by-case basis according to the symptoms that have appeared. Often they are also prescribed antimalarials useful to keep tiredness, pains and rashes at bay in Lupus patients.

When the disease has arrived in severe form, i immunosuppressive drugs which prevent the multiplication of some white blood cells. Thanks to the use of targeted and personalized drugs on a case-by-case basis, the survival of people suffering from Lupus has been extended by several years, this obviously also depends on the course of the disease and in particular on which organs or more or less vital tissues it went to. to hit.

Grapes against the stress of returning from holidays: Coldiretti's advice ❯

add a comment of Systemic lupus erythematosus: what it is, symptoms and treatment