Suspended medication: after coffee, even over-the-counter medicines are paid for 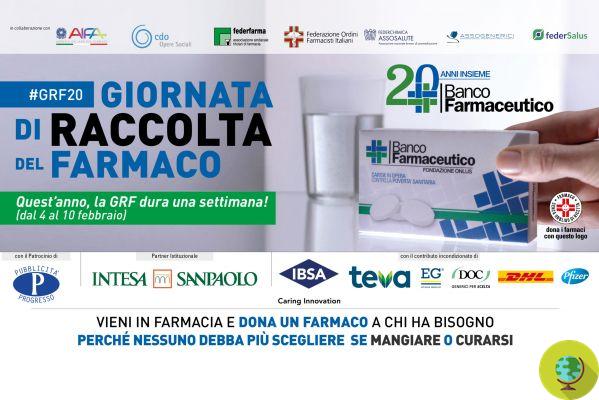 In Naples it is traditional to leave coffee "suspended", that is paid for the needy who could not afford it. After pizza and bread, but also books and live juices, now comes the "suspended drug", an initiative that is good for the health of those who receive it, who do not have enough money to treat themselves, but also for the heart of who gives it

In Naples it is traditional to leave coffee "suspended", that is paid for the needy who could not afford it. After pizza and bread, but also books and juices, now comes the "Suspended drug", an initiative that is good for the health of those who receive it, who do not have enough money to cure themselves, but also for the heart of those who donate it.

In Sorbolo (PR), for example, it is the Il Sorbo Parapharmacy, inside the shopping center, the Sovereign, to have launched a real solidarity chain. Anyone can join the project 'suspended drug' leaving a paid product whose value will be delivered to the local parish Caritas in the form of purchase vouchers to spend at the Parapharmacy. Alternatively, the donor can collect the voucher and give it personally to people with financial difficulties. This results in many more fellow citizens who need to non-loanable painkillers, antipyretics or antiallergics they can use it for free without giving up treatment.

“Since we are convinced that the example is worth a thousand words - explains Dr. Massimo Zanichelli, owner of the Parapharmacy - we are the first donors, who initially make some availablei bank pharmacy (sold without a prescription) with the desire to start a real charity competition ".

The initiative of the suspended drug: in Casirate and Arzago.

"We asked ourselves about the needs of the territory - explains to Il Corriere della Sera Attilia Bencetti, Lions member and project manager. - In Casirate we wanted to experiment with this idea which will also involve Arzago. We will provide a fund of one thousand euros that will serve to guarantee the cost of drugs to people and families in difficulty. For this money to come to those who really need it we turned to general practitioners and the social services of the two municipalities ".

leave an over-the-counter drug paid for to people who need it but can't afford it.

"In many public establishments in the country - says Dr. Elena Menichetti at Il Tirreno - citizens leave a paid coffee to those who show up after them at the counter. It is a gesture of courtesy that presupposes a gesture of generosity towards the other: I do a courtesy to you that one day you will return it to me. It is with this spirit that we thought: we sell drugs, so why not extend this practice to medicines? After all, I think there is a great need for it “.

#Librosospeso: after coffee and bread, culture is given away. It's boom in bookstores

Pending bread like coffee for those who can't buy it

Stages of sleep, what are they and how many hours of deep sleep does your body need to regenerate? ❯

add a comment of Suspended medication: after coffee, even over-the-counter medicines are paid for