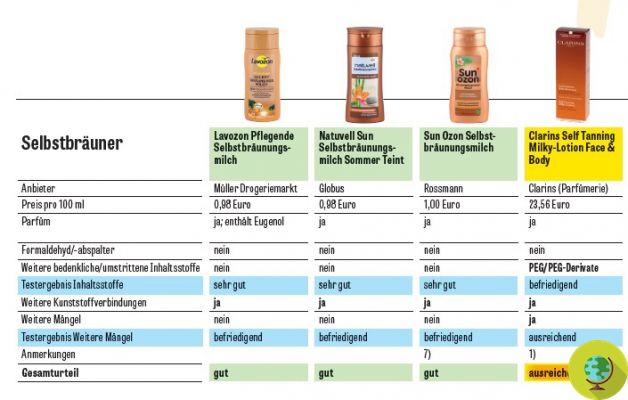 The increase in tumors and i fertility problems they can also be caused by the chemicals in some creams bronzers. This is the alarm raised by theEuropean Environment Agency, who pointed the finger at some components of common sun lotions, which can interfere with the action of hormones, especially in women.


These are the so-called 'endocrine disruptors "(IE), chemicals that disrupt the hormonal system and contribute to the increase in cases of tumor, diabetes and obesity, decreased fertility, as well as an increase in the number of neurodevelopmental problems in both humans and animals.

Among the main suspects are formaldehyde and nitrosamines, accused of increasing the risk of cancer as well as birth defects for the baby in pregnant women. Other negative effects also include skin irritation and allergy.

Another threat to our health is according to the EEA, the active ingredient in artificial tanning without UV rays, the deidreoxiacetone (DHA), which reacts with the amino acids in the skin making it darker. This substance, which derives from plants such as sugar cane with the use of fermentation of glycerin if sprayed on the skin and absorbed into the bloodstream, can cause danni al dna.

The EEA study also highlighted that these substances, also present in food, pharmaceuticals, pesticides, household products and cosmetics, could cause not only breast cancer, but also prostate cancer and male infertility. As a result, our 'sexual' health can also be put at risk by increasing levels of exposure to mixtures of some widely used chemicals.

"A precautionary approach should be taken to many of these chemicals until their effects are more fully understood," said EEA Executive Director Jacqueline McGlade.

The Weybridge +15 (1996-2011) report on endocrine disruptors is the result of an international workshop that evaluated the results of the last 15 years of research. And the results have not been very encouraging. The report clearly shows that there is strong evidence of ED damage to animals. However, the effects of EI on humans are still difficult to prove, due to the length, cost and methodological difficulties of this type of study.

Again, it's better avoid overdoing it, preferring when possible the use of natural products.

- How to protect your skin in the sun

- the 10 foods that make you tan the most

Sun creams: here are the brands that have failed the protection tests ❯