Sulfur dioxide, what is the additive that hides in meat and fish

Sulfur dioxide, meat and fish contain large quantities. It is one of the most used food additives to make these foods palatable but also one of those less declared on the labels. This was revealed by the new 2015-2018 National Additives Plan drawn up by the Ministry of Health and just announced

Sulfur dioxide, meat and fish they contain large quantities. It is one of the most used food additives to make these foods palatable, but also one of those less declared on the labels. This was revealed by the new 2015-2018 National Additives Plan drawn up by the Ministry of Health and just announced.

La report it generally concerns the official control of food additives in our foods. A total of 12.416 products and additives were analyzed. The finished foods targeted by the Plan and most analyzed were: meat, drinks, fish products, confectionery products and fruit and vegetables.

Unfortunately, as revealed by the Ministry's analysis, 3458 non-conformities were found on 51 samples of additives in food products, corresponding to 1,5% of the samples examined.

Going into detail, the non-conformities belong to the following food categories: 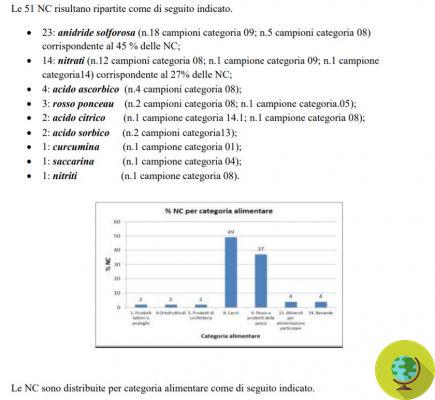 Sulfur dioxide, what it is and where it is found

Sulfur dioxide falls into the category of sulphites which in turn also includes some of its inorganic salts. The main difference is that sulfur dioxide is used in the form of gas and in the liquid state, while the other sulphites are in powder form. It is often used to keep the color of some foods unchanged. 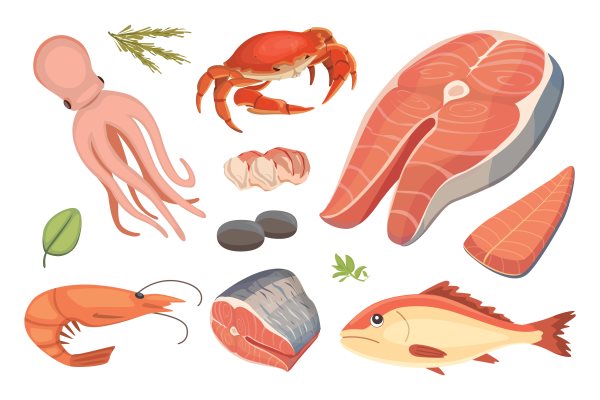 Among those that contain it we find in particular: cod, shrimps, preserves, fresh or frozen crustaceans, dried fruit, pickled and oiled products, jams and marmalades, vinegar, wines, fruit juice-based drinks, meat. In the label of the packaged products it is indicated as E220

Despite its high toxicity, it is often used as an additive, especially in oenology. The World Health Organization indicates the Allowable Daily Dose in 0,7 mg / kg of body weight. The LD50 (Lethal Dose 50%) is equal to 1,5 g / kg of body weight. If the doses usually used by the food industry are respected, sulfur dioxide does not cause particular effects in healthy subjects. But atexcess intake, also due to the fact that it is not always indicated on the label, various ailments are attributed. Among the most common symptoms we find migraines but also attacks of bronchospasm in those suffering from asthma, but also stomach pain and vomiting. A particular sensitivity may develop in some people.

In addition to the toxic effect, sulfur dioxide also has an allergenic action. From 25 November 2005, with the entry into force in Europe of the EC Directive n.89 / 2003 ("Allergen directive") it is mandatory to indicate the presence of sulphites and sulfur dioxide in wine and other foods when the concentration exceeds 10 mg / L or 10 mg / kg, expressed as SO2.

According to the Plan, it is necessary to continue to "monitor the correct or unauthorized use of additives in food, paying particular attention to additives such as sulphites, which are healthily relevant".

Sulphites on the label

We learn to recognize other sulphites. In the label of packaged products they can be indicated with codes ranging from E220 to E228. Specifically, it is:

Soul Mate: 5 Things That Happen When We Meet Her ❯

add a comment of Sulfur dioxide, what is the additive that hides in meat and fish