Sugary drinks increase the risk of premature death, especially in women. I study 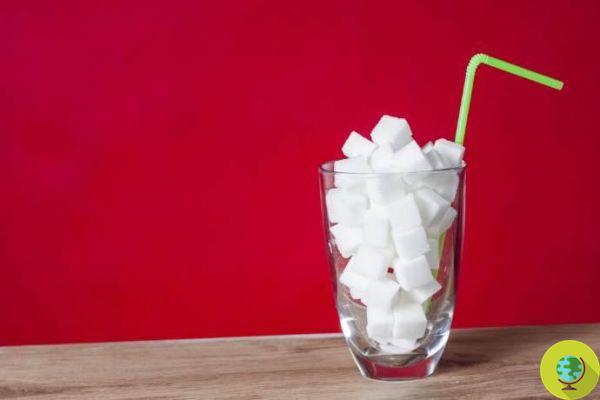 Drinking sugary drinks frequently and in the long run is absolutely not good for you, here's why.

Frequent and long-term consumption of sugar-filled drinks such as "energy" drinks or fruit juices is linked to increased risk of premature death for cardiovascular disease and, to a lesser extent, for cancer. And the risk mainly concerns women.


According to new research, in fact, compared to women who drank sugary drinks less than once a month, those who ingested more than two servings a day had a 63% increased risk of premature death. Men who took the same portions instead had a 29% increase in risk.

Those who consumed more than one sugary drink a month, but less than two a day, appeared to have an effect that American researchers call a "dose effect". dose effect: the more they drank, the greater the risk. An association that remained true when scholars also considered lifestyle factors, including dietary factors and physical activity, demographics and family history of type 2 diabetes.

Already "previous studies have shown strong links between the consumption of sugary drinks and weight gain, type 2 diabetes and other cardiometabolic conditions such as heart disease and stroke," explains lead study author Vasanti Malik. The next step, Malik says, was to examine how sugary drinks relate to the risk of premature death.

The researchers used data from 37.716 American men in the Health Professionals follow-up study that began in 1986, and 80.647 women in the Nurses' Health Study, which began in 1976. The results are a snapshot of an average of the studies in the 1994.

La leading cause of premature death in the new research was cardiovascular disease, followed by cancer, mainly of the colon and breast and overall it was found that consuming sugary drinks increases the risk of premature death from cardiovascular disease by 31% and cancer by 18% when the group that drank more than two drinks a day was compared with those who drank less than one a month.

A further study published last month in the Women's Health Initiative found aassociation of drinking two or more artificially sweetened drinks per day and an increased risk of stroke, heart attack, and premature death in women over 50.

In short, both studies indicate a link between sugary drinks and the risk of death for women.

But that this kind of drinks, be they carbonated, fruit juices or other, they are certainly not allies of our health we already knew. High sugar levels not only contribute to overweight and obesity, but also increase the chances of developing diabetes and metabolic syndrome, a number of conditions that increase the risk of heart disease.

Sugary drinks increase the risk of premature death especially in women. I study

add a comment of Sugary drinks increase the risk of premature death, especially in women. I study