Sugar: increases the density of the breast and consequently the risk of cancer 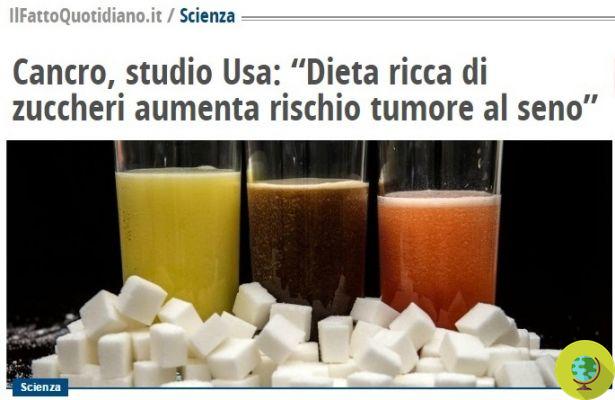 Drinking sodas 3 times a week increases breast density and this results in a higher breast cancer risk. This is supported by a Canadian research

A team of researchers from the Department of Social and Preventive Medicine, University of Laval Cancer Research Center in Canada, has discovered another good reason to minimize sugar consumption. In fact, it seems that a regular intake of this substance increases the breast density, risk factor for breast cancer.


The study, conducted in 1555 women, estimated the dietary sugar consumption of the sampled people who were asked to indicate how often they had consumed sugar-based products, especially beverages, during the previous year. In this way it was possible to reveal one correlation between the consumption of foods and beverages added with sugar andincrease in breast density.

As Caroline Diorio, one of the authors of the research, explained: “Breast density was determined by a mammogram for each participant. This variable does not correspond directly to the firmness of the breast but it is a measure relating to the abundance of glands and ducts in the breast tissue ”. Dense breasts, in fact, have less fatty tissue and more glandular tissue and like this increases the number of cells that could potentially become cancerous.

The increase in breast density due to sugar consumption was estimated to be just 3 percentage points higher, but this small difference is enough to increase the risk of cancer, the researchers say. Among other things, the women did not consume sugary drinks every day, most of them used these soft drinks about 3 times a weekHowever, the problem is that in these drinks there are usually about 10 teaspoons of sugar, while according to the latest recommendations of the World Health Organization, women should not exceed 6 teaspoons per day.

The good news is that sugar naturally contained in food is not part of this discussion. So leave the sugary drinks aside and do yourselves instead a nice fresh juice or a fruit juicer!

- Breast cancer: software evaluates the risk of getting sick

Sugar: just take it out for a month to see these 9 amazing benefits right away ❯

add a comment of Sugar: increases the density of the breast and consequently the risk of cancer