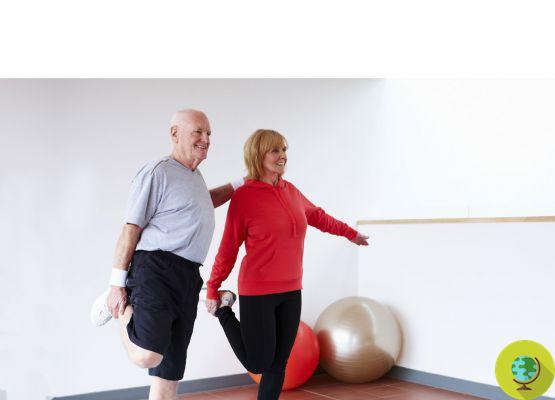 A simple balancing exercise could help determine if an older person is at risk of having a stroke. This is supported by a Japanese research team


La prevention it is always the most effective means of avoiding the onset of pathologies and damage to our organism as can be for example ictus. In recent years, science has been trying to find ways to identify the people potentially most at risk through new analyzes and tests, in order to intervene in time, avoiding the worst consequences.

Now new study of the Kyoto University Graduate School of Medicine (Japan) published in Stroke, proposes a very simple test that can be carried out in particular by the elderly population, already in itself more likely to find themselves having to deal with a stroke, to assess the actual risk.

It is simply about balance on one leg for at least 20 seconds. Those who cannot, according to the researchers, need to be monitored more frequently as they would be at greater risk of stroke.

The team of experts to test the effectiveness of the exercise in question took a sample 841 women and 546 men (mean age 67 years). Each participant had to try several times to perform the exercise and then underwent MRI to assess the health of the cerebral microcirculation. It was thus found that the people who had the greatest problems with the small vessels of the brain were also those who had had the most balance problems during exercise.

As stated the Professor Yasuharu Tabara, lead author of the study:

“Individuals who exhibit poor balance should receive more attention, as this could indicate an increased risk of brain disease and cognitive decline. The difficulty of balancing only on one leg for a short time is a simple measure of postural instability and could be a consequence of brain anomalies ".

Stroke: The risk increases if you have frequent memory loss

add a comment of Stroke: A simple balance test to assess risk