Stop smoking in cars with children and pregnant women: the new bans in force since Christmas

Via the packs of 10, and no more cigarettes in the car in the presence of minors and pregnant women. The ok from the Council of Ministers arrives. In fact, the legislative decree transposing Directive 2014/40 / EU of the European Parliament has been approved. Here's what will change

Via the packs of 10, e stop on cigarettes in the car in the presence of minors and pregnant women. The ok from the Council of Ministers arrives. In fact, the legislative decree transposing Directive 2014/40 / EU of the European Parliament has been approved. Here's what will change.

Minors. The innovations introduced have been designed above all to protect children and teenagers. For this reason, the new decree approved yesterday 12 October introduced a series of prohibitions, such as stopping the sale to minors of electronic cigarettes and refill containers with the presence of nicotine.

More frequent checks will also be carried out on vending machines to ascertain the correct functioning of the automatic systems that detect the age of the purchaser.

Hospitals, cars and pregnant women. Stop the cigarette in the car, in the presence of minors and pregnant women but also in the external appurtenances of pediatric hospitals and scientific care institutes (IRCCS). Smoking will also be prohibited outside the pediatric, gynecological, obstetrics and neonatology wards.

The cross-border distance selling of tobacco products and e-cigarettes will also be prohibited.

Warnings. Maybe there "terror" strategy it could bear fruit. At least according to the Government, which in the new packages will insert combined warnings (images and text) relating to health up to cover 65% of the external surface of the front and back of the cigarette pack or rolling tobacco. Smokers will find writings such as: "Tobacco smoke contains over 70 carcinogens" and "smoking kills" associated with images of people sick and in hospital due to smoking. Via also the packs of 10 and the small packs of tobacco. 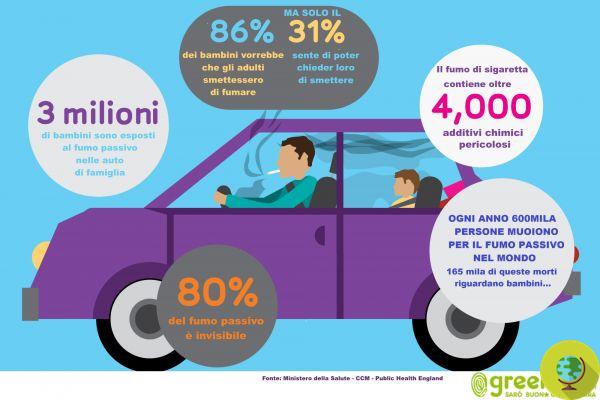 In a tweet, Health Minister Beatrice Lorenzin made it known that the new bans will be in effect as early as Christmas.

Approved legislative decree on smoking, in defense of minors no smoking in cars. Effective by Christmas.

Many. The penalties for the sale and supply of tobacco products, electronic cigarettes and new generation products to minors will be tightened. In fact, retailers must be sure of the age of those who buy, also asking for an identity document. If you sell to a person under the age of 18, you will face a fine of between 1.000 and 4.000 euros and a three-month suspension of the license. At the second sanction, the license is revoked.

Cigarette e. Finally, e-cigs cannot be sold to minors, as well as cigarettes, and must have child-resistant safety closures.

CIGARETTES, NEW RULES: NO SMOKING IN THE CAR AND SHOCK IMAGES ON PACKAGES

SMOKING: SOON STOP TO CIGARETTES ALSO IN THE CAR, ON THE BEACH AND IN PARKS

add a comment of Stop smoking in cars with children and pregnant women: the new bans in force since Christmas